Jesse and Angie run into Brot in the park as they make their way to Lucy's christening at the hospital. Off to the side, Jesse thanks Brot because he made this day possible. Jesse thinks he can finally stop looking over his shoulder because no one has come forward. Brot walks Angie to the hospital, as Jesse hangs behind to spend time with his daughter. Ryan sees them and has a moment with Lucy. He sadly congratulates Jesse and tells him to have a beautiful day. After Ryan leaves, Jesse tells Lucy they will pray for her sister Ellie today because she will be with them.

Opal cuts Tad's hair at home before Lucy's christening. She knows he is doing everything he can to make himself more appetizing for Cara. He thinks that makes him sound like a snack. Opal really likes Cara and how she is keeping the spring in his step. She thinks it's becoming a real marriage. Opal assumes that he fears Cara is not over Jake yet, but she can fix that. She pulls out hair dye, but he laughs it off. 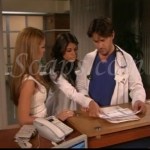 Amanda sees Jake at the hospital, as Cara walks in. Amanda points out Jake never mentioned that Cara was back at work. Jake stammers and stutters about why he didn’t tell her, but she says she's okay with it. Amanda walks away and Cara asks Jake why he didn't tell her. He says he was just waiting for the right moment. He then gets paged for an emergency and Cara offers to help him.

Cara and Tad meet up at the hospital. He again tells her how happy their marriage has made him. He admits he hasn't felt this good in a long time. 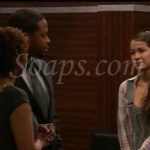 Angie meets Frankie at the hospital. He introduces her to Maya who is there to pick up a prescription. Maya learns Angie has a new baby and hopes Angie gets her miracle to see her one day.

The christening gets underway at the hospital with Jake and Amanda as godparents and Frankie, Randi, Brot, Tad and Cara in attendance. Afterwards, Frankie tells Angie, Maya would make a great babysitter for Lucy.

After recognizing Maya from the station in the park, Brot brings her to Krystal's where the christening after party is. Brot heads over to Angie and Jesse's table as Maya pensively watches them.

Tad returns home and tells an excited Opal that he wants her to dye his hair. 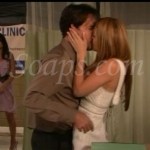 Jake goes to the clinic tent and recalls kissing Cara. He hears a noise and calls out for Cara. He sees Amanda, who says, "No. It's your wife." She asks him if the tent reminds him of his time with Cara. He declares it doesn't. She thinks they can have something just as dangerous and spontaneous as he had with her and kisses him as Cara walks in.

Greenlee tells Madison at Fusion that she should go home due to her devastating loss. She points out a fully paid maternity leave is covered, as well as any after care she might require in the form of therapy. Madison thinks she just wants to keep her away from Ryan. Greenlee insists she just wants to help her. However, she goes on to stake her claim with Ryan, but Madison reminds her they aren't married anymore. Greenlee retorts that Madison isn't having his baby anymore, which Ryan arrives to overhear. Ryan can't believe Greenlee was throwing that in her face. Greenlee defends herself, but Ryan doesn’t think anything can justify what she said. Madison tells Greenlee just to fire her like she wants. Ryan is even more incensed, but Greenlee won't defend herself anymore and leaves. Madison and Ryan talk about Lucy's christening. Madison doesn’t want him to be alone today, so she takes his hand and leads him to the park. Greenlee returns but doesn't find anyone there. After she and Ryan console each other in the park, Madison also returns to work, but finds it empty. She says out loud that she will honor Sara by staying strong.

Greenlee heads home and finds Ryan. She apologizes for lashing out at Madison, but he say he's not angry. He's not sure he can be today. She knows about the christening and tells Ryan he shouldn't have been alone. Ryan says he wasn't. She assumes he was with Madison. He tells her he's been feeling very isolated and alone lately. She knows he and Madison shared a painful loss, but they share something hopeful and beautiful. It's something worth fighting for. She doesn’t want him to ever forget that.

Tad has a hair mishap.

You’re Married To A Middle-Aged...