Greenlee sets up Griffin and Kendall, Jack grows more concerned about "Erica" and Erica gets Ben to talk.

Scott walks into Fusion, but Madison brushes him off. He knows she is in pain and he wants to try and fix it. Scott says he loves her, but she doesn’t want to hear it. He wants to make it right, but she recalls how many chances he had to come clean with her, but he didn’t. She yells for him to get out and starts throwing things at him. He leaves and she continues to trash the place until she breaks down in tears.

After Jack catches her with a drink at the Yacht Club, "Erica" embraces him and thanks him for saving her. He questions her about almost taking a drink, but she makes excuses and then says she has to work on a project for Caleb and leaves.

Ryan and Greenlee head to Fusion. She points out they haven't gone out in awhile together. Kendall joins them and then Griffin shows up, by Greenlee's request, so they can celebrate his freedom. Kendall sits down and dryly tells Greens, "I love being ambushed." Scott pulls Ryan aside and tells him how upset Madison is upstairs. Ryan leaves to check on Madison, as Kendall gets a call from Jack, who is scared to death about "Erica." He wants to rally the troops and confront her. Across the way, a photographer spots "Erica' and asks to take her picture. She happily complies and then sees Greenlee alone with Griffin. She tells the photographer she might be able to give him a big scoop. "Erica" walks over to talk to her about buying the hospital. Griffin leaves as a skeptical Greenlee questions "Erica" and then tells her to talk to the hospital lawyers. The photographer walks over and "Erica" poses with Greenlee, who looks confused. "Erica" gets a call from Jack, who knows there is no project with Caleb and orders her to come to Kendall's. 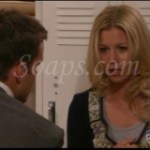 Upstairs at Fusion, Ryan comforts a broken down Madison, who can't get over Sara's death. He tells her Scott was worried about her and she explains how she let him have it. She declares she's fine though. 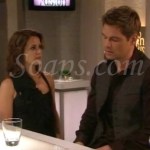 Back at ConFusion, Greenlee confronts Scott about running to Ryan for help with Madison. He chuckles that she won't be able to keep them apart this time. Scott says everything she did to keep them apart only brought them closer. Scott leaves as Ryan returns. He tells Greenlee he and Madison lost a child so they have to go through this together. 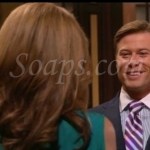 Marissa and Bianca notice JR and Krystal laughing together at the restaurant. Marissa calls it progress and admits JR gets to her as well. She tells Bianca she is thinking of giving him another chance. Bianca is understanding, as Marissa knew she would be. At the bar, Krystal warns JR that while he can make her laugh, he better not hurt her daughter. JR vows he will prove he's worthy. Bianca gets a call from Jack and gets up to meet with him. As she passes JR, gives him the music box to give to Marissa. 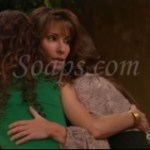 Jane shows up to Kendall's house. Jack tells her he loves her and leaves her with her daughters. They question her about her sobriety. She promises she's still sober. They ask why she's been avoiding them. "Jane" says didn’t want to dump all her pain and anxiety over the kidnappers on them. They assure her they are there for her and engage in a group hug. "Erica" is clearly uncomfortable and makes up an excuse to leave. Once alone, Kendall answers her door to Griffin who brought her lunch. She spills some of the food on her dress and then realizes the last time she wore it was with Zach. She explains she hasn't been able to wear the dress since Zach died, but today she put it on without thinking. She wonders if that's progress. Griffin thinks it is.

Jack meets Opal at Krystal's and tells her about catching "Erica" with a drink. 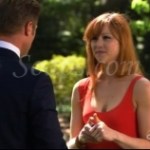 JR and Marissa take Miranda and AJ to the park. JR gives Marissa the music box. She is blown away that he remembered the song her father used to sing to her. She calls it the most thoughtful gift anyone has ever gotten her. JR says she hasn't seen anything yet and kisses her, as Bianca observes from afar.

In her room, Erica tries to make headway with Ben. She thinks he can just walk away from Jane, but he angrily says he can't because he is the reason she did all of this. She just wants to understand what's going on so she can help him. He says she can't help him because he is responsible for what Jane lost. Over the P.A. system, Jane orders Ben not to say another word. Ben leaves and Erica says to herself that she needs to find out what Jane's secret it.

Opal wants Tad to fight for his future.

Cara is touched by Lucy's christening.

I've Almost Killed A Board Member Or...