I’ve Almost Killed A Board Member Or Two. They Get Over It.

David offers Griffin a job, JR plots and Jack is puzzled by "Erica." 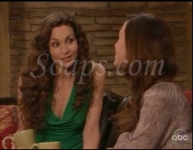 After Bianca confesses to Kendall that she has feelings for Marissa at the house, she admits that Marissa is straight. So, if she has feelings for anyone, it's not her. Kendall urges her sister to talk to Marissa, because she could be the one woman who makes her happy. Bianca thinks she should just cut her losses. She's going to start by returning a music box she bought for Marissa, which plays the song her dad used to sing to her. Kendall encourages her to still give it to her. Bianca doesn’t make a decision yet and leaves to have ice cream with Miranda.

From the mansion, Marissa watches Scott working on the gatehouse. She tells JR they should do something nice for him and suggests they invite him to move back in. JR wonders if she just wants a buffer between the two of them. Marissa denies it. She wants to give Scott some support and thinks JR should get someone to help him finish the gatehouse. JR offers to make a call. AJ runs in wanting ice cream and the family decides to go together. Marissa tells JR he has a phone call to make first. JR calls his contractor and Marissa happily leaves the room. JR tells his guy he'll double his money if he makes sure the gatehouse doesn't get finished.

Bianca brings Miranda to Krystal's for ice cream. Marissa shows up with AJ and they grab a table. As Marissa asks Bianca what she wanted to talk to her about earlier, JR joins them. JR walks to the bar to get his own sundae and Marissa notes Bianca's bad mood. Marissa thinks she's uncomfortable around her because she reminds her of Ricky. She gets it, but she hopes Bianca can get over it because there would be a huge hole in her life is she's not in it. Bianca responds that Marissa got her through their ordeal and says she has something for her. At the bar, JR tells Krystal he wants Marissa and he'll prove he loves her. He knows Marissa wants a real family and so does he.

Liza finds Griffin at the free clinic to give him good news about his case. David shows up and gives Griffin his keys because he doesn't need this 'sad little job' anymore. It's time to spread his wings. Liza leaves and David tells Griffin he will probably be returning to PVH soon and he wants him to take on the role of Chief of Cardiac Surgery. Griffin doesn’t think the board will overlook his stealing drugs. David retorts that he's almost killed a board member or two. They get over it. Griffin would like to work with David again, but he's already made his decision. David urges him to think about it. David leaves as Kendall enters. Before they talk about the Miranda Center, Griffin shares that he won't be going to jail and he'll be sticking around to perform six months of community service. Kendall is thrilled and gives him an advance for his services so he can pay back the hospital.

Kendall and Griffin meet back at her house to go over Miranda Center details. He tells her how great she was with the kids at the clinic and holds her face in his hands. After they stare into each other's eyes, Kendall breaks away. 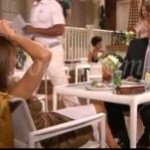 A fan approaches as Jack and "Erica" enter the Yacht Club. "Erica" is all too happy to sign an autograph and pose for photos with her. After Jack snaps the photo, he points out the "Erica" he knows isn't too keen on such things. She says she's trying something new and then announces to the whole restaurant that she's buying lunch for everyone. Surprised yet again, Jack notes that as out of left field even for her. She just wants to revel in how great her life is. Jack takes her hand and says he has an idea of how they can do that. He kisses her hand and mentions their dry spell. "Erica" wants the next time they have sex to be like the first time. Jack brings up her girls, but "Erica" just wants to talk about them. Jack is puzzled, pointing out she is a wonderful mother. "Erica" continues to evade the topic and Jack wonders why she's been acting so strangely lately. She says there's nothing going on and then sees David in the background. When "Erica" accommodates another fan, Jack walks away. David takes Jack's seat to threaten Jane. Liza walks in as Jane assures David she'll help him with the hospital. Jack returns and David joins Liza at the bar. After "Erica" steps away to the ladies room, she sneaks back in and picks up a drink at the bar. Jack sees her and grabs it out of her hand.

Monday's Pine Valley spoilers for All My Children:

Madison goes off on Scott.