Bianca confesses to Kendall, Griffin appeals to Liza and Maya gets a phone call.

After Scott punches JR at the yacht club, he stalks off, leaving his cousin with a bloody lip. 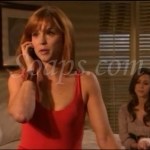 In Ricky's old hotel room, Marissa encourages Bianca to tell her what's on her mind, because after what they went through, nothing will change how she feels about her. Marissa gets a call from the Yacht Club manager saying JR has been in an altercation and he probably shouldn't drive home. Marissa tells Bianca she has to go and Bianca asks if she still loves JR. Marissa admits JR is winning her over and she likes being part of a family. She asks if there's a reason Bianca thinks she shouldn’t try again with him. Bianca just wants her to be happy and if JR makes that happen, then she'll support her.

Downstairs at the club, JR gives the manager a tip for calling Marissa for him.

Caleb brings Asher from the hospital to the Chandler mansion. As he settles in, Colby gives him the keys to a car, so he doesn't have to climb up into his truck. Maya brings Colby into the foyer because she got a package. Colby discovers she was sent clothes from a fashion designer who loves her blog and wants her to be the face of her line.

Colby and Maya head upstairs to Colby's room with the box of clothes. Colby gives Maya all of the clothes. Maya gets a call. Colby listens as Maya tersely tells whoever is on the other line that she will call them back because she is at work. Colby assumes Maya was talking to her boyfriend, but Maya says it was her aunt. Colby leaves and Maya calls the person back. She says she's too busy to go on another date right now but she will call him back later. She adds, "I love you too."

Marissa brings JR home. He tells her he was sucker punched and it was unprovoked. She asks who hit him. Scott shows up and admits it was him. After some words with JR, Scott leaves. Marissa defends Scott, which sets JR off. He heads into the main room and hears Caleb offer Asher a place to stay with him. JR declares Asher isn't going anywhere. Back in the foyer, Scott returns after getting a text from Marissa. He asks her why she wants to be with JR again. She says she's only there for AJ. He hopes so. Scott leaves to work on the gatehouse. Colby walks into the main room as Asher decides he will stay at the mansion. Colby announces that she will spend less time on her vlog in order to focus on what's important.

After getting messages from Cara, Kendall and Griffin meet at the Yacht Club. Griffin chuckles and says, "Cara's done it again." He clues Kendall in on the set up. She thought he wanted to meet about sticking around for the Miranda Center. Griffin reiterates that once he's cleared, he's outta there. He wants to get back in the field to restore his reputation. Kendall notices a table of women leering at Griffin and notes his reputation seems to be intact. Griffin tells her attracting members of the opposite sex has never been a problem for him. Bianca walks in and heads to the bar. A man asks about her phone and touches her, which sets Bianca off. She yells at him to get his hands off her and has him thrown out. Kendall tries to calm her sister down, but Bianca is tired of not feeling safe anywhere. Bianca runs out as Kendall follows her.

At the house, Tad tells Cara he has a meeting with Liza to discuss Griffin, but he can't get a hold of Griffin. Cara tells him she set him up on a date with Kendall. Griffin shows up and tells his sister to stay out of his personal life. Tad says they have a meeting with Liza right now and they all head out.

Cara sneaks into Krystal's, as Griffin and Tad make their case to Liza. Liza says she will make a phone call and will recommend community service. Cara embraces her brother, as Tad tells Liza outside that she's doing the right thing. He thinks Colby would be proud. Liza won't hold her breath for that one. 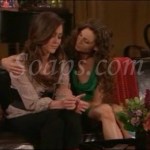 Kendall and Bianca go back to Kendall's house. Bianca rants about what happened with Ricky. Kendall realizes she brought another Michael Cambias into their lives and Bianca had to pay the price again. Bianca assures her it's not her fault. She says she feels like a hypocrite though after counseling battered women to be strong, when she feels so scared. Kendall praises her sister, telling her how strong she really is. Bianca gets a call from Marissa, but keeps it short. Kendall questions Bianca's behavior and wonders what's going on. Bianca admits she's falling in love with Marissa.

Marissa wants Scott to move back into the mansion.

Jack is suspicious of "Erica's" behavior.

I've Almost Killed A Board Member Or...