Another Time. Another Place.

Jake and Cara say goodbye to the past, while Ryan isn't ready to move forward.

On the running trail, Jake calls Tad out on having real feelings for Cara. The brothers bicker, but then Tad admits he has serious feelings for Jake's ex-wife. Tad insists he didn't go looking for it, but if he thought he had a chance with Cara he'd take it. Tad turns it around on Jake, asking if he still has feelings for his ex. Jake declares he is committed to his wife and kid and Cara is the past. Jake caustically adds if they're happy together then he's happy for them.

Through tears at the clinic, Cara tells Griffin she wanted to sleep with Jake, but they didn’t go through with it. Cara tells him what happened, which causes Griffin to worry, especially about them working together again. Cara assures him it's under control. She declares as wrong as it is, at least she let herself feel something. Unlike Griffin who closes himself off. After a lifetime of worrying about her, Cara wants him to start worrying about himself. She asks him to promise he'll stay in Pine Valley. Griffin says if he stays, there's no way he'll let her risk her happiness or her life. After Griffin leaves, Tad shows up. Cara delicately tells him how Jake comforted her when she thought something had happened to Griffin. She assures him they didn't do "that," but she didn't want to lie to him. Cara knows Jake belongs with Amanda and says she's happy with him if he'll still have her. He knows how hard that must have been to confess. He's proud to have her as a wife. She doesn't think she should go back to work at the hospital, but he knows there are a lot of people she can help there. He gives her his father's stethoscope and tells her it's time to go back because it's where she belongs. 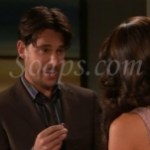 Cara and Tad show up at the hospital. Jake learns Tad knows what happened between them and that Cara wants to return to the hospital. Tad leaves and Jake pulls out Cara's wedding ring. He tells Cara it's time to put the past in the past. She says, "Another time. Another place." He quips, "We'll always have the Sudan." They walk over to the hazardous material bin and throw the ring in it together. They walk away from each other, but both turn to exchange longing looks.

Greenlee moves the furniture around her and Ryan's place according to the principles of Feng Shui so they can gain peace and happiness. Ryan doesn’t think it's that simple. She wanted them to have a lovely night since Emma is at a friend's place. They discuss the strain on their relationship and Greenlee says she just wants one night to remind him why he fell in love with her. Ryan says he hasn't forgotten why he fell in love with her. Kendall enters with Spike, much to Greenlee's frustration. Kendall says Ian is with a friend and she wanted Spike to be with family. Greenlee leaves to pick up some food, as Kendall asks Ryan what's going on because she feels like she spoiled Greenlee's plans. Ryan plays it off but admits they aren't planning another wedding. Kendall tells him to forgive Greenlee or cut her loose. He owes it to her. Ryan leaves to do something and Griffin shows up. She thinks he's there to talk about the Miranda Center, but Griffin says he's there to see Greenlee. They discuss his leaving and she makes a case for him staying. Griffin reiterates that once the charges are dropped he's leaving town. He thinks a clean break is best for both of them.

Greenlee runs into Jack at ConFusion. She wonders to her father if she's turning into her mother. Despite her controlling nature and self absorption, Jack assures her she is nothing like Mary. She worries her postponing the wedding was mistake. She states she can't wait around for Ryan to realize he still loves her. She needs to make it happen. Ryan shows up and Jack leaves. Ryan leads Greenlee to a table he had set up for them so they can discuss their relationship. He pours them a glass of wine and she says it's nice to be talking to each other like this. She wants to rethink postponing the wedding. He gets defensive wondering if this is a test. He ultimately says he's not ready. He walks away to get the check and Jack calls his daughter. She says things aren't good, but she won't give up.

Scott tries to rekindle his romance with Madison.