David figures Jane out, Kendall gets Griffin to stick around and Jake and Cara remain guilt-ridden.

In the park, Amanda is surprised Jake can forgive her so easily after lying to him about possibly being pregnant. Jake just wants to put it in the rearview mirror. Amanda remains confused, but Jake tells her he knows she did it out of love.

As Jake later takes a nap at the hospital, he dreams of Cara and how she left him. 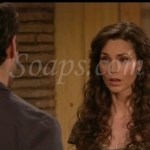 At home, Kendall tells Griffin she wants him to stay in Pine Valley. She needs him to start a new Miranda Center with different services, in a different neighborhood. Griffin thinks it's a good idea, but says he wants to move on when he's cleared of the charges. Kendall just wants him to stick around for a little bit to teach her what she needs to know. Then he can leave. Griffin agrees and they get to work on making plans. Griffin is impressed and happy to see her bounce back so fast. She says she's doing it for Zach and she doesn't want to let him down. She tells Griffin she finally has peace though, which she owes to him. He jokes he's like her hero. Kendall counters he's more like a pain in the ass, but one that she's very grateful for.

After kissing Cara, Tad stutters and jokes around about why he did it. He then talks about how their marriage has changed him for the better, as Cara guilty recalls discussing her kiss with Jake. He wonders what's wrong with her, but she says she wants to handle it on her own. Tad assures her he is there for her if she needs him. He adds that she brings out the best in him. Tad leaves and Griffin stops by to see his sister. She tells him Tad got Liza to reopen his case. Griffin thinks she has one hell of a husband. She knows but says their marriage can never be real because of her and Jake. Griffin thinks otherwise because she and Jake are in the past. Cara wonders what if they're not.

Jake goes for a run and repeats in his head that he loves his wife and Cara is in the past. Tad sees him and asks what he's running from. 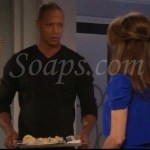 Erica begs Jane's henchman to keep her company in her room. He walks in and she promises not to tell Jane. She eats her meal and learns that the henchman prepared it. She tells him how wonderful it was and suggests he has the talent to open his own restaurant. She wonders why he would work for Jane. He gets annoyed and leaves. Erica tries to get him to talk to her again and he returns with a flower. He tells her his name is Ben.

David demands that "Erica" sign the letter of recommendation reinstating him at the hospital and in exchange he will administer the epi-pen. Knowing she has no other options, "Erica" complies and signs the letter. David holds up his end of the bargain and stabs her leg with the pen. Once "Erica" recovers, David questions her about Jane Campbell, her allergy to fennel and who she was yelling at in the park. He then asks why she had reconstructive surgery, noting he got a good look at her hairline while she was resting. She tries to evade, but then David pulls out a photo of a little girl. "Erica" gets emotional and grabs it. David says, "I'm Dr. David Hayward. Who Might You Be?" "Erica" tries to put him off, but he knows the real Erica too well. He asks what happened to the real Erica and if she killed her. Jane says, "I love Erica. I would never hurt her." He demands answers about how she pulled off her transformation. She just says with Erica's power, she can help rebuild his reputation as a surgeon. She tells him if he keeps her secret and works with her, it will be the best decision he ever made. David mulls it over but won't give her an answer just yet, because even Erica Kane has to sweat it out sometimes.

Greenlee tries to keep her relationship with Ryan alive.

Another Time. Another Place.