Kendall and Tad commiserate, Jane has an allergic reaction in front of David, and Amanda wants to celebrate.

Caleb stops by Jack's looking for "Erica." Jack thought she was at work with Caleb. "Erica" walks in and tells the inquiring men that she hasn't been able to rebound after her ordeal like she thought she would. "Erica" says now that her girls are safe, she wants to celebrate and enjoy life…and her money. Caleb hands "Erica" contracts he needs her to sign. She quickly signs them, leaving Caleb a little bewildered that she didn't have any questions or comments. Caleb has more business to discuss and "Erica" suggests he get them a table at Krystal's. Caleb leaves and Jack asks if "Erica" signed David's letter. She thinks everyone deserves a second chance, which sets Jack off. "Erica" knows how to handle David and asks him to trust her.

"Erica" gives Caleb a gift at ConFusion. He reminds her she is with Jack and that she can't have it both ways. "Erica" assures him she isn't flirting with him. He tells her they have a press conference coming up and she's concerned about what she'll wear. He's taken aback by her response and then heads for the office. "Erica" pulls out a flask and adds alcohol to her drink. David walks and threatens to expose her drinking and that Kendall was the one who shot him if she doesn't sign his letter. The waitress comes by with a meal David ordered for "Erica," which he says is her favorite. After taking a bite, her throat starts to swell up because she is allergic to fennel.

David brings "Erica" to the Yacht Club and helps her with her epi-pen, but sees that it's prescribed to Jane Campbell. 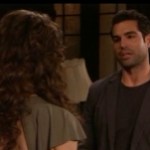 At the house, Griffin tells Kendall he is amazed by the way she handled Ricky. He gives her Tad's P.I. gear to return. She reminds him she wouldn’t be there if it weren't for him. The young boy drops by so Griffin can check out his arm. He tells the boy to have his friends and family check out the free clinic from now on and they'll take care of them. The boy responds, "Not like you did." He leaves and Kendall says the boy is right.

Jake comes to the free clinic to discuss Cara returning to the hospital. She wonders if they could make it work. He declares he loves his wife and suggests they can be friends. Cara wants to take some time to think things over and then gets back to work. Jake leaves and Griffin enters. He calls his sister out on having Kendall try to convince him to stay. She wants him to let himself love because she knows he will be good at it. Cara tells her brother she thought she'd never be able to open up her heart again after Jake, but she was wrong. Griffin is thrilled to hear that she might have feelings for Tad and encourages it. She just thinks he is trying to get off the topic of himself and urges him to listen to his heart.

Jesse meets Tad at Krystal's to discuss Griffin's case. Tad then goes on to tell Jesse how much he enjoys being with Cara. After Jesse has left, Kendall joins Tad to return his equipment. Kendall notes how weird it will be when Griffin's gone. Tad points out those Castillos have a way of getting under your skin. She asks if it was hard getting married again after Dixie. Tad doesn’t know, but admits his marriage to Cara is turning into something more complicated. Kendall can't imagine loving someone as much as she loves Zach. Tad doesn't think it has to be 'as much'. Maybe it's just supposed be love somebody, but not the same. Kendall thanks him for being able to relate.

Kendall calls Griffin to her house. She tells him the sale of the casinos is taking a little longer than expected and that Tad thinks he will get off with just community service. She says that means he will be sticking around a bit longer, which is good because she needs him.

Tad shows up at the clinic to tell Cara Liza is working on a deal for Griffin that would exclude jail time. Cara enthusiastically hugs him and he kisses her. 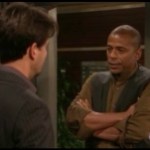 Jesse finds Jake at the hospital and tells him Tad has fallen for Cara pretty hard. Jesse wants to make sure Tad won't get stomped because of Jake's past with Cara. Jake declares his history with Cara is just that – history.

After whisking him away from the hospital, Amanda brings Jake to the park to celebrate the first time he proposed to her. He tells her how much he loves her and kisses her.

In her dingy room, Dixie dreams of her life with Tad.

Monday's Pine Valley spoilers for All My Children:

David realizes Jane is an imposter.

Griffin figures out what happened between Jake and Cara.

Erica gets closer to Jane's henchman.