Madison wants to be on her own, Griffin's ready to leave town and Amanda worries about her marriage.

With Bianca by her side at home, Kendall opens a gift from Ricky to the boys which is a Red Wings jersey with Torres on the back. Bianca has a flashback of Ricky grabbing her, but says what Kendall went through was worse. Kendall says they are Kane women who persevere.

JR overhears Marissa leaving Scott a message at the mansion and they share a nice moment. Later, Bianca stops by and JR asks if she can help Marissa take it easy and let people help her after what happened with Ricky. He thinks she's coming around and is letting him back in. JR leaves and Marissa returns to visit with her friend. They rehash their experience with Ricky and credit each other with getting through their ordeal. They hug, but an emotional Bianca backs away and leaves.

After saying goodbye to Sara, Scott brings Madison home. She sees that he packed up all of the baby's things and tells him she can't stay there. The stuff may be gone, but the memories are still there. Scott tells her he got them a new apartment before the baby was born. He gives her the keys and says it's all hers. As she mulls it over, she gets a phone call from Ryan, who offers to find her a place and pay the rent. After hanging up, Madison tells Scott she can't accept help from men anymore when she should be doing things for herself. She thanks Scott for his gesture, but says she needs to start taking care of herself. Scott tries to stop her from leaving, but he runs into JR. Scott demands to know what his cousin wants. JR says Marissa is worried about him and since he's worried about Marissa, he's there's to check on him. Scott just thinks he's worried if he and Madison don't work out, he will end up with Marissa. Scott erupts and yells it has nothing to do with JR, but he will do whatever he can to keep Marissa from him.

Jake and Cara have coffee at the hospital and guiltily discuss keeping their kiss a secret. Amanda finds them and Cara leaves to check on Griffin. Amanda gives Jake a drawing from their son. She calls Jake the best father and husband. She apologizes for lying to him and promises to do better. She kisses him, but Jake just looks more guilt-ridden.

Tad tells Griffin in his hospital room that the DNA tests on Diana cleared him. He's also cleared of stealing narcotics but not the antibiotics. Brot stops by and tells him he's free to go, but not to go too far. Griffin runs into Ricky being wheeled out in the hallway. Ricky taunts Griffin about Kendall and his feelings for her. After heated words are exchanged, Ricky is taken away. Cara appears and questions Griffin about his feelings for Kendall. Griffin says they are just friends. Besides, Kendall will never get over Zach. He tells his sister after the charges against him are dropped, he will leave Pine Valley.

Kendall comes to the hospital with the numbers for the casino sale and runs into Cara. They look for Griffin, but he's already gone. Cara relays how much she will miss Griffin when he leaves and hints that she wants Kendall to help her convince him to stay.

Griffin stops by the abandoned house and smiles when Kendall knocks on the door. She gives him the bids on the casinos. She wants him to pay back the hospital for the meds he took with the money. She notes Cara is upset he's leaving, but Griffin has learned that you don't have to see someone every day to keep them in your heart.

Tad finds the father of Mackenzie, the girl whose parents Cara offended, in the chapel. Tad appeals to him on Cara's behalf and gets him to withdraw their complaint. Jake races in as the dad leaves. Tad fills Jake in on what happened and asks if he is ready to take Cara back as a doctor. He urges his brother to hire her back, but he doesn't want Cara to find out he had a hand in it. 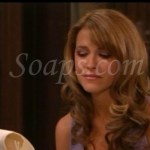 Amanda and Tad run into each other at Krystal's. She admits that she lied to Jake about her possible pregnancy and calls herself her own worst enemy. Tad doesn’t give her any argument, but assures her no one could take her place in Jake's life. He thinks her insecurity is the only thing coming between them. Amanda knows he is older and wiser, but wonders what if she's right and he's wrong?

At the free clinic, Jake tells Cara she could get her job back and asks if she would be okay working with him every day. She asks, "Are you?"

Jane has an allergic reaction.

Kendall admits to Tad she has feelings for Griffin.

Getting To The Other Side Of The...