It's a Bird. It's a Plane!
I find Madison to be pretty insipid, but I did enjoy her calling Ryan out on his Superman complex. Finally a woman who doesn't want someone to save her all the time. Well, it's a soap, so she does, but at least she's making a case against it and forcing Ryan to face his penchant for swooping in. Now if only the tables could be turned and he needed some saving himself.

Devious or Dumb?
I didn't understand David's plan with Bianca. He drugged her so she couldn't ruin the launch party, but she woke up well before it was to begin and he let her go! What was the point? She still could have run her mouth about her suspicions. I totally expected better from the devious doctor. I did find it funny though that he just happened to have a vial of drugs on him. I guess you never know when you'll need to drug someone to further your agenda. I also do appreciate how much he loves Greenlee. He may be trying to help and protect her in wildly off the wall and dangerous ways, but I do feel it's out of love, which I don't think is reciprocated with the same intensity.

Apples and Trees.
I'm not sure where they are going with Liza and Damon. I'm starting to fear they could actually hook up. I certainly hope Liza doesn't repeat history here with him and they have something else in mind for Liza, Tad, Damon and Colby.

A Very Hubbard Episode.
Friday's episode was all about the Hubbards. I found it interesting that they focused on just one storyline/family and, based on the spoilers, it looks like they're doing it again next Friday with Tad/Damon/Liza/Colby. I'm not sure how I felt about it though. On the one hand it gave us much more detail and allowed us to really feel Angie's reaction to the possibility of losing her eyesight, but I did feel the absence of the other storylines. It also really highlighted the fact that Frankie needs a storyline – STAT. What did you think? Vote in our poll about the Hubbard-centric episode.

That's all I got this time around. What did you think about last week's events on AMC? Were you disappointed AMC was shut out at the 37th Annual Daytime Emmys? Share your thoughts below. 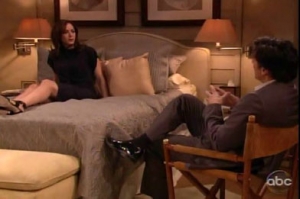 Credit: Take off your cape. (Soaps.com)

Eye Opening.
JR got a wake up call in the form of his friend’s widow who just gave birth. He suddenly decided he needed to grab what he wanted in life, but I thought he did anyway, as he seems to really only play by his own rules. However, instead of grabbing his family, he grabbed Annie and laid a juicy kiss on her. I don’t think Marissa would have appreciated that, but she was too busy scheming to get her husband’s attention through their son AJ.

In Cahoots.
As much as I don’t get Scott’s devotion to her, I do enjoy that he and Annie share the secret about Scott stealing the nanotech invention from a deceased Palmer. It was pretty funny watching them try to get their hands on Palmer’s will at the hospital and I hope we see more of them working as a united couple.

Hit the Ground Running.
Much like JR, Erica also decided to grab life by the horns, as she came back in full force after her mountain ordeal. She accepted Jack’s proposal and hightailed it over to Fusion straight from her hospital bed, well coifed and dolled up of course, (as mamajj said, “No time to look drab only fab.”) in order to lay the smack down on Greenlee. She then rallied the troops in order to save her daughter’s company. I was happy she didn’t allow Madison to take the fall regarding the scandal, even though Greenlee was all about it. Regarding the scandal, did someone really steal funds from Fusion, or is the paper trail just the one that David created? I’m a little unclear on that. 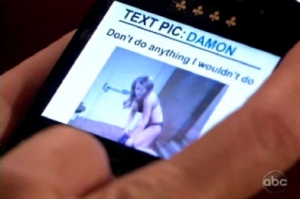 All My Children Saturday Teaser Poll: Photos of Liza

All My Children: Aiden Turner at The Shops at Mohegan Sun. (Video Update)