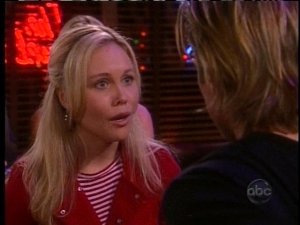 The rumors have been flying for months and now we know the truth – Babe, at least the Babe that we all know and love, is leaving Pine Valley! An All My Children representative has confirmed that Alexa Havins will leave the show this fall and a new actress will immediately take over the role.

According to the rep Amanda Baker, currently Jolene on GH: Night Shift, will take over the role in October.

Amanda will begin shooting her episodes in the next few days. Amanda isn't a newcomer to the small screen. In addition to her work on GH: Night Shift and General Hospital, she has appeared on shows such as "Campus Ladies", "Palmetto Pointe" and "One Tree Hill". She also appeared in Lifetime TV Network's made for TV movie "Hello Sister, Goodbye Life".

As for Alexa Havins, who has played Babe since 2003, her final air date is set for October 10th.

Earlier this year, rumors began to float that she was ready to leave Pine Valley in favor of the greener pastures - and bigger roles - of Los Angeles. When real-life hubby Justin Bruening, ex-Jamie, AMC, left the show in August most fans were certain that Alexa would follow in his footsteps.

When she first joined the show, she was immediately given a high profile storyline - the Baby Switch story. Some fans immediately liked the newcomer but many did not. However, Alexa soon grew on fans and is considered one of the most loved of Pine Valley's ladies. In 2005, she was nominated for an Emmy for Outstanding Younger Actress.

Love them or hate them, recast roles are a staple in daytime television. We want to know what the fans have to say: do you like the idea of an immediate recast? Or should the writers have taken a little time before giving us a new Babe?

Cameron Mathison signs on for...