The Hubbards.
Angie's near collapse at the wedding was a tease of things to come for the couple. I don't know what's wrong with the doc, but I strongly suspect it has something to do with the boy she worked on without protective gear a couple of weeks ago. That is just a guess, not a spoiler. What do you think? Vote in our poll about Angie.

One is the Loneliest Number.
Who will Greenlee have left when the truth about what happened to Erica comes out? Just David I suppose. Based on Jack and Ryan's reaction to her sort of confession, they are going to want nothing to do with her when they find out that she and David set Erica up and that she knew David tampered with Erica's plane. Bianca returns this week, who will surely be furious with her and when Kendall finally returns, I can only imagine there will be Hell to pay. When she's all alone with David, she will have to face how far off course she's veered and set out on the road to redemption. Or maybe she will fully embrace being Mrs. David Hayward and be drawn further to the dark side.

The Chandlers.
I was a little surprised the family shenanigans at the Chandler mansion were only shown on Monday. I guess David punching Jake, Jesse manipulating things to keep David away from the wedding, Liza making sure history repeated itself and the actual wedding itself was time consuming. While we did have them onscreen, JR and Annie proved there was still heat between them as they passionately made out in the hotel room, but then Annie pushed him away. She sort of told the truth about their encounter to Scott, which landed her an invitation to move in with him. Since she already lives in the guesthouse, does that mean they are sharing a room now, or is she just getting upgraded to a room in the main house?

Up On a Mountain.
Even Erica only garnered one episode this week. Somehow she found the plane wreckage by herself and discovered the surly Caleb was already there. After she found a locket that obviously touched a nerve with him, he picked her up and carried her away. Where did he take her? More importantly, how will his brutish behavior leave such a lasting impression on her when she finally gets rescued, as the spoilers indicate? 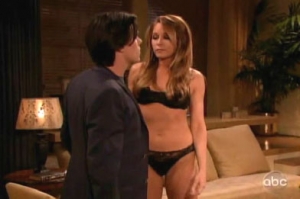 Credit: What about Hilary? (Soaps.com)

Last week centered mostly on Jake and Amanda’s wedding, but there was also a little Chandler and mountain drama thrown in.

Misguided Intentions.
I understand Liza’s plan to break up Damon and Colby before he can hurt her, as it’s a staple in a soap mother’s arsenal, but how does having her daughter find her naked with her boyfriend really help her? She is trying to avoid the past by actively making it happen. It makes no sense. All she ended up doing was jeopardizing her relationship with both Tad and Colby because Damon now has those pesky photos. Although, to echo some of you on the message boards, since the photos were taken of Liza in her lingerie, in her house, without her knowledge, they look more like the work of a stalker.

The Missing Piece.
Tad and Damon connecting as father and son is missing the beat of both men confronting Hilary about it face to face. They reintroduced her name and presence, so they should get an actual actress, the original or a recast, to play her so they can fully round out the story.

The Wedding.
Amanda looked beautiful, but I wish Jake would have shaved, gotten a haircut and worn black. They are a super cute couple and I like them together, but their cutesiness is getting a bit much, so I’m ready to see them do something besides love each other. 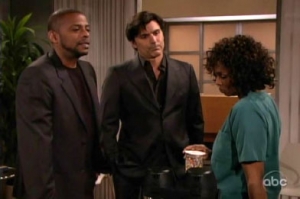 All My Children Poll: Who Loses Their Job?

All My Children Video Promo: Erica's Back!