Daddy's Little Girl.
David's also got his hands full with Marissa who needs his manipulative expertise in getting the upper hand on Annie. I would think his latest debacle with Erica would make him hesitate to offer such advice, but David didn't give it a second thought when he suggested she fight dirty. I like the gradual change in Marissa, as she hasn't exactly jumped all over the idea of manipulating the situation, but she's taking baby steps. The first one being her vehement defense of JR to David, which appeared to be for the benefit of her husband. What she does next and how far she takes it will hopefully be good soapy fun.

Four's a Good Time.
I'm not entirely sure what Annie's up to, as she seems to truly be affected by JR, but taunts him like she isn't, and is all over Scott. I'm also not exactly sure why Scott is championing Annie these days. Maybe it's just to get under JR's skin, which is obviously working, but he seems to be interested as well. As long as Marissa continues to grow feistier and gives as good as she gets, and Annie continues to play the cousins, I'm looking forward to watching the foursome's storyline continue throughout the summer.

Guy Advice.
Frankie jokingly gave Madison his number in case she needed any more advice with Ryan, and she took him up on it. His reaction to her actually calling him was pretty funny, but here are my thoughts on it: This reminded me of the movie "He's Just Not That Into You" when the exact situation happened and the characters ended up as a couple. I also thought everyone on soaps already had everyone else's phone number, especially characters who have been in a storyline for as long as these two have, so I was surprised when he gave Madison his card. Most importantly, does this mean they will eventually hook up, or will their friendship just be a source of jealousy for Randi, whenever she pops up again? The Hubbards are supposed to be featured more this summer, so I hope we find out.

Did Frankie have the best advice of the week? Let us know in our poll on the best words of wisdom. 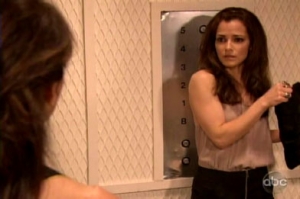 Last week Caleb became more mysterious, Greenlee’s guilt got the best of her, the Chandler mansion continued to be a hotbed of activity, and a lot of advice was doled out.

Secrets of a Mountain Man.
Caleb’s aggressive behavior towards Erica makes me wonder if he does know who she is and has a grudge against her for reasons other than the fact that her plane crashed into his home, which wasn’t exactly her fault. I like the character, but I’m a bit confused as to why he wouldn’t want to help Erica get the medical attention she needs or to get home. I would think even the most private, hermit-like person would have enough compassion to want that for her. Obviously, he has an agenda because he revealed he does have contact to the outside world via a cell phone. Although, I’m not sure if it was his phone or Erica’s that he swiped, but I can’t wait to find out more.

Greenlee’s Guilt.
I really want Erica to be rescued, if for no other reason than because it will put a stop to Greenlee’s constant wringing of her hands. Although, I did enjoy her guilty vision of Erica taunting her about what she’s done and how David will turn on her. It makes sense she would feel guilty, but I feel like her freak outs and David’s non-reassuring reassurance is just repeated every day. I also found it odd that Greenlee only now assumed David thought Erica could be dead. Didn’t she think that herself? Her plane went down and they haven’t heard a word from her. What other realistic conclusion would you come to? At least David seems to be showing some genuine concern for Erica and wants to make sure she’s okay. Whether that is out of guilt, fear, or real emotion isn’t entirely clear to me, but that’s what makes David, David I guess. 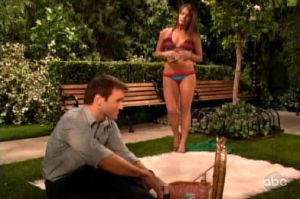 All My Children Saturday Teaser Poll: A State of Undress

All My Children Poll: Upcoming Storylines 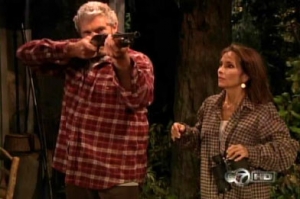