I did laugh that Liza only offered Damon two grand to stay away from her daughter. It seemed like such a paltry offer. If he was really interested in cash, I don't think that would be enough to pay him off.

The Hubbards.
I loved seeing Jesse and Angie together last week. The way they interact is so easy and natural I truly believe they have each other's backs and I don’t feel like I have to worry about them breaking up next week. Angie was great as she took Jesse's advice and tried to be nice and patient while dealing with David. She even went so far as to ask him and Greenlee out to dinner with her and her other half. That is one dinner I can't wait to witness. As I've already previewed, there's a serious story coming up for Angie and Jesse and I have a feeling it has something to do with the boy who came into the hospital she wanted to quarantine. Whatever it is I can't wait to see more of The Hubbards facing a new crisis together.

Crowded House.
The Chandler mansion continues to be a source of entertainment and anguish, depending on whose viewpoint you're looking at it from. Annie is having a great time sticking it to Marissa and flirting with both Scott and JR, while JR is losing his mind over her and Marissa has been pushed so far she asked David for advice on how to handle her rival. This could be an interesting development. I was even happy for the obviously proud papa that his daughter turned to him for his distorted guidance, but considering Erica ended up crashing into someone's house after he took her on for Greenlee, I fear for what he comes up with for Annie. I'm liking that Marissa is breaking out of her good girl shell a bit, but what do you think about it? Vote in our poll about Marissa turning to David. 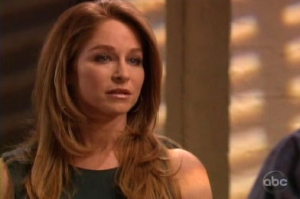 Last week gave us more Caleb, more Chandler hijinks, and more of the endearing Hubbards, but less of the Liza I enjoy.

Filling a Void.
I’m really enjoying Caleb so far and I think he could be the strong male character I was talking about a couple of weeks ago that AMC is missing. He seems like a man’s man who certainly does not take any crap from Erica, which is always refreshing. Harleygirl49 commented that she’d like to see him be a relative of Zach Slater’s. Caleb is supposed to have ties to Pine Valley and so far it doesn’t seem like too much of a stretch to think they could be cut from the same cloth. And if it brought Zach back even for a couple of episodes, I’d be all for that idea.

Lonely Liza.
I don’t like how Liza is being portrayed as the lonely bitter shrew. Alright, that might be an overstatement, but the Liza I remember was stronger and tougher than this. She didn’t illicit sympathy because she was too busy taking charge and making things happen. Maybe I’m remembering her wrong from when Marcy Walker played her, but I don’t want to see Liza being asked to stand up in Amanda’s wedding because she’s sitting alone at a table in Krystal’s restaurant, or even trying to control her daughter’s dating life. I want her to be a positive influence on her daughter, while kicking butt, taking names, and seducing hot (perhaps younger) men. Don’t get me wrong, I want her to be a real person with real emotions, but I don’t want her made out to be a pathetic character we should feel sorry for. I’d like to see her get a viable love interest and create some serious heat, because that’s the Liza I remember and I know Jamie Luner has it in her to steam up the joint. 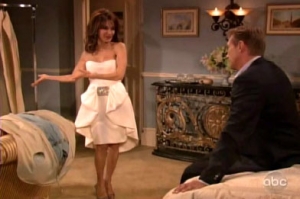 All My Children Saturday Teaser Poll: Visions of Erica

All My Children Video Promo: Jake and Amanda's Wedding