Stuck in the Middle.
I was impressed with Jack as he finessed his way around Erica and Greenlee's war. He stood up to Erica, pointing out she didn't need Fusion, but Greenlee did. He came right out and told the woman he loved he wanted his daughter to win. Loved it. But he didn't totally abandon Erica, as he defended her to Greenlee and David when the scandal broke out and he suspected they had something to do with it. I thought it was a nice balance of loyalty and, thankfully, smarts.

Erica's New Adventure.
Erica was actually pretty mature last week as she apologized to Jack for thinking he was working with Greenlee to get Fusion from her. That was a pretty big step. She also took Opal's words about her being selfish to heart and went to Pigeon Hollow to retrieve what Palmer left for her, which was a lovely letter and a lock box. It should be interesting to find out what is in the box if Erica ever gets back to Pine Valley so Jack, who has the key, can open it. I can't wait to see next week's scenes between Erica and the take-no-crap Caleb. Should be a rude awakening for her. If you haven't seen the clip already, check out the video sneak peek of Erica and Caleb.

Looking to the Future.
It seems Amanda has laid her fears to rest over her mother, as she basically said goodbye to Janet and told her Jake and Trevor were her future. Even if Jake's proposal wasn't the smoothest thing ever, she now has a wedding to focus on. I don't know about you, but I would have been a lot more embarrassed if I had just flashed all my friends and family though. The wedding should presumably be good for a few laughs and lighthearted scenes, but it will also apparently launch a story for Angie and Jesse, which is what I'm really looking forward to.

Re-creating the Past.
I don't know what to think about Tad and Liza. I like her and I like them together, but I have a hard time thinking she's the Liza he has such a storied history with. I'd like to see Tad in a relationship though, so I'm onboard for it to be explored more.

That's it for me this time around. What did you think about last week's events? Feel free to agree or disagree with me below. 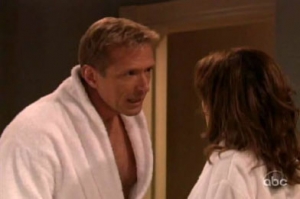 Last week, David and Greenlee’s plan for Erica went too far, Scott developed a plan of his own and Jake’s plan almost backfired. A lot happened, so let’s break it down.

Good Times at the Mansion.
The goings on at the Chandler mansion are getting pretty entertaining. I’m not sure why Marissa took JR back so quickly though, especially when she found Annie in JR’s bedroom when he was half naked. I think it would be interesting if she took him back so she could secretly make his and Annie’s life a living Hell. I do love when nice, mousy characters get a backbone and turn bad. It might be too much since that’s what happened with Annie, but watching Marissa and Annie battle on an even level might be fun. What do you think about the situation? Vote in our poll about Marissa taking JR back.

Scott also shared the idea he stole from Palmer with Annie, which was rather trusting, but the thought of them teaming up is intriguing. The nice guy/bad girl combination usually makes for a good coupling and it could have some serious consequences for JR. I had to laugh though as he explained the prototype for a computer that could project on any surface, as I thought of The Bold and the Beautiful‘s Oliver and his super cool phone that projected video, also, on any surface. Sometimes the soap world is so small.

The Hayward Effect.
I’m having a hard time with Greenlee’s willingness to frame Erica for a crime that could land her in jail. I know she’s always been a schemer and done some morally questionable things, but this seems like she’s taking it a bit too far. If David had come up with the idea, I would have understood, but this was all Greens. I see her more of the blackmailing, manipulative type, not the deliberately sending someone to prison type. It was funny though that Greenlee chastised David for his scheming in one breath, but was okay with him helping her with her own devious plan in the next. The couple that schemes together stays together I guess.

David of course took her plan one step further and tampered with Erica’s plane, which put La Kane in serious jeopardy. While he only meant for the plane to be grounded, I sense there will be a lot of backlash when that little tidbit comes out. 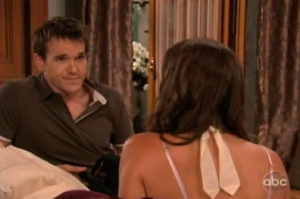 All My Children Saturday Teaser Poll: Love in the Afternoon 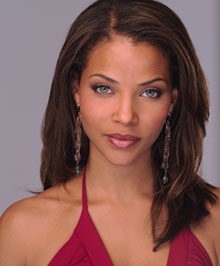