Chandler Chips.
The chips will fall where they may at the Chandler Mansion now that JR has 'fessed up to Marissa about his infidelity. What I love best about this family conflict is that it's character-driven, and the main players have many layers to them, which keeps them interesting. Marissa surprised me with the intensity of her reaction to JR's admission, and Scott cracked me up as he talked to Annie in the hotel - he does get off some good one-liners! I like this storyline, and look forward to watching Annie try to land either Scott or JR for herself. Which of the Chandler scenes were your favorite this week - vote in the Soaps.com Chandler Family Snap Poll!

Where is Krystal?
I thought we were headed for more screen time for feisty Krystal when she got hired at Jack's office, but it still hasn't happened. She's one of the best characters on the show - get her in a juicy storyline!

Brotalia...
I'm liking the switch up of having Brot be the moody one for a change, and Natalia being nicer. She was getting a little over-the-top for me. It was good to be reminded of Brot's time in Iraq as well this week. I liked his talk with Ryan at the casino.

What did you enjoy this week on AMC? What drove you crazy? Let Soaps.com know in the comment section!

This will be my last AMC Rant, as next week, I return to my old stomping grounds in the B&B section of Soaps.com! It's been a pleasure sharing All My Children with all of you, and I hope you enjoy Lori Wilson's updates and blogs beginning Monday! 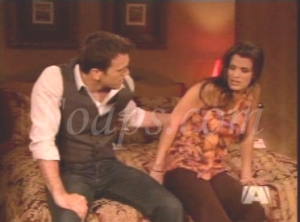 There is no doubt All My Children has improved vastly. There are some fairly compelling storylines going on now. Of course, they may alter again as the material from the new head writing team comes into effect on May 12. Here are my notes on the past week:

Janet From Another Planet!
Wow! It has been so entertaining to have Janet back in all her technicolor craziness. Kate Collins has done a stellar job, as expected, depicting Janet’s off-the-wall scariness. How funny was it when she told Amanda she put her father, Trevor, in the freezer because she thought they could thaw him later and bring him back to life! Just the mention of his name made me miss ol’ Porkchop. How about when Janet revealed to Amanda the reason she killed her father – talk about intense! It’s been great having Janet spicing things up in Pine Valley, even if it’s just for a short time. I just hope they don’t have Amanda go crazy – poor Jake!

Damon Dilemma.
Is anyone else asking themselves why on earth the writers haven’t brought back Hillary?! I just can’t believe for one minute that she would utterly abandon her son in this way! Otherwise, the story continues to be pretty good. The Colby/Damon dynamic really works, and Michael E. Knight has been wonderful as conflicted Tad. Some have commented about Tad continually bailing Damon out of trouble, but plainly put, I get it – he feels sorry for him! My only issue with Tad is that I miss his brilliant one-liners, which have been markedly absent lately. Also, I still don’t like Liza as a big meanie. It gave me a glimmer of hope when she brought Tad with her to the hospital – maybe they’ll still get it together.

Rio Bound
Well, I have to admit, I don’t really understand what compelled Greenlee to go to Rio with Ryan. It was definitely a peculiar choice, and it only got stranger when she wound up confiding in him about maybe being pregnant with David’s child. Awkward! As for David, I felt bad for him for about five seconds, until he started terrorizing Angie and Madison again – good grief!

All My Children Snap Poll: Greenlee's Trip to Rio!

All My Children Saturday Teaser Poll: Who Steals a Document?