David's Latest Scheme.
I enjoy David's vulnerability, but it is short-lived as he has already started scamming and scheming again. Does anyone else feel a little weary of the mustache-twirling?

Bossy Witch.
Believe it or not, I'm not referring to Erica. Nope. It's Greenlee who is just too big for her britches. Where does she get off telling Natalia she can be a cop and a model, but then informing Madison she is not allowed to have another job? Seems like this has more to do with Madison working for Ryan than anything (yawn), which doesn't intrigue me in the slightest. I think the writers need to do something different with Greenlee, the only time I've been able to stand her since she got back was when she gave in to her passion for David.

Bratty Brot.
I can understand why Brot's nose is out of joint this past week, and I like Natalia kowtowing to him for a change - it's made her more human. The whole naked picture debacle in the police station was one of my favorite parts of last week - Jesse was a scream!

What are your thoughts on the past week in Pine Valley? Share them with Soaps.com in the comment section! 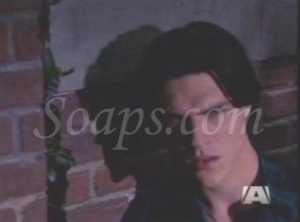 Last week’s episodes of All My Children weren’t too bad, although things are feeling a little predictable at times, and there was a void left by Adam’s departure. Since we’re on the cusp of seeing the new writer’s work come into play, we can expect things to change again as well – quite a ride! Here are my observations:

Who’s Your Daddy?
Damon’s story is pretty interesting, but I feel like Liza’s whole attitude is contrived and not realistic – if she’s so worried about being close to Colby, why alienate her? Also, in real life, Tad would have told that boor Paul Miller that he wasn’t Damon’s biological father – who wouldn’t under the circumstances? Another question – why does everyone assume that Damon will be angry at Tad if he learns the truth? Tad did nothing wrong, and it would probably be a relief to understand why he never connected with Paul Miller. He could be angry with Hillary, and angry about being lied to, but I don’t see why he should direct it at Tad. I feel so much better when storylines make sense to me! Anyway, I’m still enjoying the connection with Colby and Damon, and the scenes with the horrible Paul Miller made us feel sympathy for Damon as was intended.

Anticipation…
Love her or hate her, Janet from Another Planet is back and she’s out to get close to daughter Amanda! I say thank goodness this was all leading up to a Janet return, because other than the love in the afternoon between Jake and Amanda, the storyline has been tedious. Also, what was the point of bringing in Victor Alfieri to play the role of Ciro, which has essentially amounted to a bit part?

The Chandler Mansion Shenanigans.
This week was full of interesting conversations with all sorts of implications at the Chandler Mansion, but I think the real fun will begin if Marissa finds out that JR slept with Annie. I actually never like to see anyone heartbroken – I just think it would shake up the household even more, and the alignments will become more clear. I would also like to see JR confront his feelings for Annie, and how Scott will react to the fallout. Good storytelling! Vote in the Scott’s Love Life Snap Poll.

Erica’s Airs.
I just grind my teeth every time Erica declares to Jack that it is over between them, it can never work…blah, blah. Such a phony way of getting him to chase after her. Could she really still be so teenager-like after all of her experiences with men? Why won’t the writers let her evolve some?

All My Children Saturday Teaser Poll: Who Will Run Chandler Enterprises?

All My Children: Bobby Steggart Nominated for Tony Award!