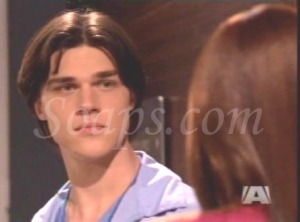 All My Children has really shown signs of improvement again this past week! Sure, there are still things to rant about, but the bottom line is that viewers are enjoying watching the show again, and are back to anticipating what’s to come in Pine Valley. Here are some points about last week:

Drinking With Damon.
This is one storyline I just wasn’t feeling – for the second week in a row. I love the actors and characters – Liza, Damon, Tad – but the plot has skewed strangely. After really enjoying the dynamic with Liza and Tad, and being thrilled at the news Damon would turn out to be Tad’s son, the writers inexplicably have chosen to knock viewers out of that groove, resulting in characters who suddenly don’t seem like themselves and a plot that feels all wrong. Also, the writers seem to be leaning toward doing a replay of Tad’s history with the Damon character. At this point, I’m not keen on that idea – something original would be refreshing and unpredictable.

You’re Fired!
Umm…would anyone in Pine Valley who knows Jesse really believe he fired Natalia? Worse, Natalia gave up her undercover status to Ryan within an hour of showing up at the casino!

Sexiest Man Alive!
Jake and Amanda were enjoyable to watch this past week. So nice to see Jake not fixated on David and able to focus on his brother and his wife. He had a couple of funny/cute one-liners, and the Jake/Jackson scenes were good too!

Moony Madison...
Ryan is so irritating these days, that you almost find yourself rooting for Madison to go looney tunes on him. Unfortunately, if Ryan were in danger, it would probably mean Greenlee coming to his rescue, which I don't want to see.

Everything Has Changed!
This is what David told Greenlee this past week and I was on tenterhooks to see what else he would say - would he admit to falling in love with her? I'm eating this up! The chemistry is great between these two, and it's interesting to see David in a different (romantic) light, while at the same time still loathing him for his misdeeds.

Chandler Shenanigans...
The drama just keeps getting better with the Chandler family! Setting aside the fact that JR was on death's door only one short week ago and has had an unbelievably quick recovery, everything else has been delicious in this storyline. Everyone has chemistry with everyone else (with the possible exceptions of Marissa and Colby, who at least is a good conniver), and every scene has been excellent. Annie's reaction to JR asking for a hug was priceless, and the scenes between Annie/Adam, Annie/Brooke, Brooke/Adam, and during the live feed video were bang on! I can't wait to see more, especially with Adam being served on Friday!

There's One Other Reason...
We all know Jackson is staying in town in hopes of rekindling things with Erica - and the heat between them built this past week. This pairing works for me - always has - glad they're going down this road, and so happy that Walt Willey (Jack) is staying with the show!

Be sure to let Soaps.com know your opinion in the Damon's Story Poll! Feel free to add your thoughts or rant in the comment section below!

All My Children Video Promo: Aiden...