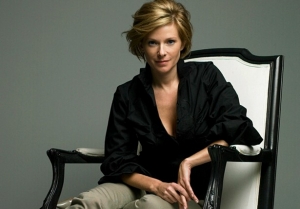 The dead will rise this summer at AMC.

The ghosts inhabiting Pine Valley won’t include fan-favorite Dixie, though. Instead, the new writers are bringing back Simone, killed by the Satin Slayer back in December. Simone’s return will be brief, only two episodes in June, but the rumors are that her return will impact a few storylines! News of Simone’s ghostly return immediately had tongues wagging about other Slayer victims returning, especially the character of Dixie.

Unfortunately, Dixie - at least Cady McClain's Dixie - won't be back in Pine Valley any time soon. Instead of a return to All My Children, Cady is making a return to As The World Turns. You can read that story here. You can also read Cady's take on returning to Oakdale on her blog here.

Cady was last seen in February, when she ate some poisoned peanut-butter pancakes intended for Babe and died. That death left a void in Pine Valley: Tad still hasn't found his and Dixie's daughter Kate and fans didn't get to see a renewal of the Tad/Dixie love match.

With the ouster of former AMC headwriter Megan McTavish, dedicated Pine Valley dwellers hoped that history would be rewritten (hey, it's happened before!) and Dixie would rise from the dead. Last week when Janet scribbled the words "Dixie Lives" on her notepad while "interviewing" Tad and Krystal, fans got really excited that Dix would be back in the near future. News of Cady's return to Oakdale have squashed those rumors.

Characters are recast all the time in soapland. Does Janet's scribble point to the return of a recast Dixie? Only time will tell.

AMC's Aiden gets 'Sirius' with fans!

Former AMC Stars: Where Are They...