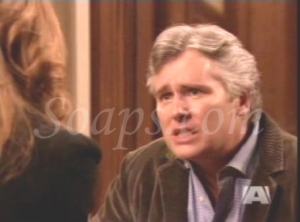 What a relief! All My Children is settling into becoming a watchable soap again. There weren’t nearly as many fast-forward worthy scenes in the past week, and there were plenty that had my attention. Let’s see where things stand:

Chief Beef of the Week: Tad and Liza have arguably been one of the funniest/sexiest couples on the show, so Tad’s abrupt change in behavior toward her this week was not only poorly explained, but was a big turn-off! There really wasn’t any reason for him not to have confided in her, in fact, knowing he might turn out to be Stuart’s grandfather could have been a big thing for them as a couple. So, I feel it’s just been written this way to create phony conflict – I prefer my conflict to make sense, please!

Come On Krystal: Krystal has been onscreen more lately, but still only as a supporting character. Krystal needs her own story – one that is going to kick start the fired-up, lively personality we know her to be. I’m over this downcast, domestic version. Also, while I’d like to see her go toe-to-toe with Liza, I’m not up for a re-hash of Krystal and Tad – seems others aren’t either – in a recent Soaps.com poll, Liza garnered the majority of votes when readers were asked to indicate who they want Tad paired up with!

Self-Destructing Damon: While I appreciate the heart-rending background story they are painting for Damon, it’s growing a little tiresome watching him do one stupid thing after another just so we can hear people compare him to Tad as a teen. This story has great potential if it avoids becoming predictable.

Chandler Mansion: I absolutely love the latest goings-on in the Chandler household! The face-offs between David and Adam, Brooke standing up to Annie, Annie’s mounting frustration and paranoia, David lurking and listening – it’s all been top notch viewing! Not to mention the rather interesting visits to JR’s hospital room this past week by Adam and Annie – fab! It’s a bit unrealistic for JR to be so feisty so fast, but I’m willing to buy it for the sake of the story. Can’t wait to see what happens now that Annie blabbed her secret!

Battle for Fusion: This is shaping up to be a decent storyline. I was reminded this week how much chemistry Erica and Jack share, too. I enjoy watching Greenlee and Erica spar, but the Randi and Madison stuff isn't doing much for me.

Bad Luck at the Casino: Just when you thought Ryan couldn't get more annoying, he's now swaggering around town as a big casino boss - urk! His exchanges with Greenlee do nothing for me, but I have to admit it might be fun to see him deal with bunny-boiler Madison, who seems to be setting her sights on him.

Frowny Frankie: You have to 'hand' it to Frankie - his incessant whining and mood swings have gotten so irritating that even Madison has moved on! We know it's Frankie's fierce pride that drives his actions, and his scenes with Angie are interesting, but he can be a frustrating character to watch.

David/Greenlee: I love the idea that he might really be falling for her! David is such a complicated character - so many layers!

Honorable Mention: I liked the scene between Liza and Colby this week at ConFusion - I felt the emotion between them.

Friday Episode: For the first time in a long while, AMC ended the week with a really good episode. There was the reveal about how Damon's parents had treated him which deeply affected Tad, the scenes with Brooke, Annie, Scott, David and Adam in the Chandler Mansion, and the zinger - JR goads Annie into telling him the last thing he would ever want to hear - that she saved his life! The acting and writing were right on - way to go!

What is your opinion about the past week's episodes of All My Children? Be sure to let Soaps.com know your thoughts in the comment section below!

All My Children: Aiden Turner's...