Soaps.com Chats with All My Children’s Melissa Claire Egan! 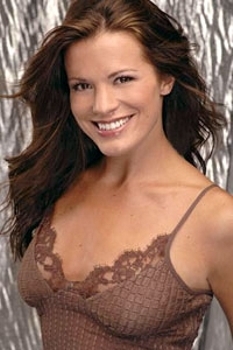 Soaps.com recently had the opportunity to catch up with All My Children actress Melissa Claire Egan, who plays the sometimes volatile and always unpredictable Annie Lavery Chandler. Read on to see what Melissa had to say about the move to L.A., recent casting changes, what’s coming up, and more!

Soaps.com: You have a Daytime Emmy Pre-nomination, so it’s an exciting time – have you selected your scenes to submit yet?

Melissa: I did, but it’s been kind of crazy – we’ve been moving this year – so the Emmy thing has been kind of last minute, we only had a few days to pick our scenes, so I just picked some Oak Haven scenes and called it a day! [laughs]

Soaps.com: Great! So, how has the move been for you? You lived in L.A. before, correct?

Melissa: I did – I lived here for three years right after college, and I moved back to New York for the show, so I have a lot of great friends here, I know the area well, I even knew where I wanted to live because I had lived in L.A. before. Some of my best friends on the planet live here, so it’s been a pretty easy transition for me!

Soaps.com: In tandem with the move, came the changes with the writers. Annie can sometimes be hard to get a handle on – has that changed? What’s your perspective?

Melissa: I think the thing about Annie is that she’s not really a defined person – she’s a bit of a nut. That’s the character – she’s a bit crazy – which is mania, which is two sides. With the Adam/Scott [David Canary/Adam Mayfield] thing, I think she does love Adam, but she definitely loves what Adam can give her. She does love him, but she’s also a young woman who has these special desires toward Scott, and other people, which is not right, but she’s not necessarily a ‘right’ person. So, she’s not really definable, but I like that because the writers tend to write her a little bit ‘all over the place’. Like with donating the bone marrow to JR – you know she’s not a bad person, so she does it, but she only does it because it will make her look good. In regard to the writing, I love Chuck Pratt and he wrote really great stuff for me, so I’ll always give thanks for that. With the new writers, they know a lot of the history, which is nice. It’s nice to have Brooke back and to go through a lot of the history, which the fans, of course, love!

Soaps.com: There have been several casting announcements that have affected your character directly, one being the return of Rebecca Budig as Greenlee – what has that been like for you?

Melissa: I was excited! I’m good friends with Rebecca, and a fan of her work – I think she’s awesome. When I heard the show was going back [to L.A.] I thought of that, so I wasn’t surprised that she came back, but I was really excited. We don’t work together a lot, which is unfortunate. The last time she came back we had all these scenes where we were fighting with each other, but now we don’t have any as of yet. Our storylines are completely separate, which makes me sad because I really want to work with her. She’s fun on and off the show, so I was really stoked about [her return].

Soaps.com: Do you enjoy the animosity between the two characters, or would you rather see them become friends?

Soaps.com: The return of Brooke has been great. What’s it been like working with Julia Barr?

Melissa: It’s been great – I watched the show when she was on, so I knew what a great actress she was, but I had never really met her. I’d seen her in the hair and make-up room back when I started, but I was kind of intimidated to say hi, you know, four years ago, and then she left, so I never really got to meet her. But, it’s been great! She’s so good, and it’s been fun working with her and David – they have so much history both as characters and as people – they’ve known each other for so long. It’s been awesome – you feel like you’re a part of TV history. I wish she were staying longer.

Soaps.com: The dynamic between Brooke and Annie is interesting. There was a scene in the hospital after Annie donated her bone marrow, where Brooke was almost mothering her.

Melissa: Everyone loves to watch some catty fights – but that gets old after a while. The writers have done a good job because you see the funny cattiness, the digs, and the jabs, but they’ve also written this thing where there’s a very nurturing, very motherly Brooke, where she’s saying ‘I can relate to you, I was like you’, so it goes a lot deeper than just the cattiness, which is huge, it’s so imperative with these scenes. It goes much, much deeper than just the top layer of cattiness. I was really impressed with the writers.

Soaps.com: That scene helped viewers see Annie in a different light. How about the news that David Canary is leaving the show as Adam? How does that affect you?

Melissa: It makes me want to cry! I hate it, because he is one of those characters that I remember watching when I was little and home from school - the patriarch, so good at being bad - and then to be able to work with him, and be able to be his last wife on the show - it's so incredible! He's so darling, and lovely, and so good - he makes it look so easy. So, we're all so sad, but I'm happy for him too - his family and his home are in Connecticut - but he's going to be so missed. He's an icon of the show and it's huge that he's leaving, but we're all happy for him.

Soaps.com: We've heard that there will be a scandal in the Adam/Annie marriage.

Soaps.com: Will Annie end up sleeping with Scott?

Melissa: There are indiscretions on several people's parts! Things are going to really surprise you - things you wouldn't expect at all. It's been really fun, and it's really, really juicy!

Soaps.com: Are you enjoying playing Annie more now than as the homebody she was in the beginning?

Melissa: Every phase to Annie has been fun. It's nice that I got to play the nice, mothering Annie as well, but it's definitely more fun to be bad, and again, it's nice to be the one who you don't know what she's going to do next - to be that character - because you can play all these different things; you can play the comedy, and you can also play the drama of their life - it's really fun getting to play all of those elements.

Soaps.com: What have been your favorite scenes to play as Annie?

Melissa: I love when Annie does funny stuff - like when she's trying to keep control of everything, and nothing is in her control! [laughs] I also had fun when she yelled at JR in the coma, I thought, 'What a horrible person.' But it was so much fun! Who does that? It was a funny moment. The weddings are fun - one of the hardest scenes was when Annie showed up to the party in her bloody wedding dress after stabbing Erica - that was one of the most challenging scenes, but also one of the most fun. All of the scenes where she was going insane were really fun. Also, when David and I did the angel and devil scene, that was great because it was just different - we're there every day with lots of dialogue, so that was just a different kind of thing to do.

Soaps.com: What's fun for you outside of the show?

Soaps.com: Do you have any other projects or appearances on the go?

Melissa: I just re-shot my Proactiv campaign, I've been part of their campaign for about three years now. I'm also doing the Stagecoach Music Festival at the end of April - I did it last year as well - that was so much fun! Besides that, I'm just focusing on All My Children and getting settled into my house in L.A. - ordering couches and getting everything hooked-up and set-up - it's been a pretty busy time!

Soaps.com: Best of luck with the Daytime Emmy Nominations coming up!

Melissa: Thank you! I'm rooting for my girl, Chrishell [Stause, Amanda], she's had an amazing year, so I hope she gets one!

Soaps.com: You're both awesome, and Annie's a great character so you have that working in your favor.

Melissa: She is. I'm a lucky girl!

Feel free to leave Melissa, or Soaps.com a comment in the space below! If you missed our prior interview, check out Soaps.com Chats with All My Children's Rebecca Budig!

All My Children: Victor Alfieri...