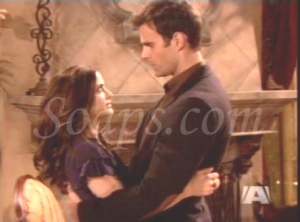 All My Children was pretty good at times last week! There are certainly things I would put a quick end to if I had the power, and there are still times I find myself looking at the clock to see if the episode will end soon, but overall the show is improving noticeably. Here are this week’s notes:

Make It Stop: The manufactured conflict between Greenlee and Ryan is so not entertaining to watch. Since her reasons for being angry with him were questionable in the first place, continually putting them in the same room to rehash the so-called animosity is nothing short of headache-inducing. That’s without even getting into the way Ryan constantly smirks condescendingly at her, as though she’s just so silly with her cute little tantrums and outbursts! Yeesh! I just feel that this hasn’t turned out to be the great love re-match with huge rooting value that the writers had hoped it would be – the Ryan character’s been through the wringer, and is not currently as popular as he once was, and Greens has great chemistry with David – time to move on!

Tables Turned: It was kind of funny when David turned the tables on Erica and tied her to the chair, and the ensuing scenes between them were nicely intense at times. But the real kicker came when Greenlee found Erica, er, indisposed, and laughed with delight – good moment! Greenlee also hit the nail on the head when she told Erica that others don’t like to hear the sound of her voice nearly as much as she does! Good stuff!

Retirement Dinner: For Jesse, anyone? I think all hope of him being a respected police chief went out the window when he actually commended Nutty Natalia for breaking the rules – just because it helped his case against David! Not only is this highly suspect, but he’s probably just unleashed a monster – Natalia will be even more unbearable now!

Bring On the Brooke: I know they didn’t bring the fabulous Brooke back just to play mother hen to everyone. That said, her scenes with Annie have been pretty sweet – their exchange in the hospital was a brief, but interesting, change in the dynamic – made you see Annie’s vulnerable side. What I’m really waiting for, however, is for Brooke to run into Erica! Meowrr!

Dr. Demento: David's had some really entertaining scenes this week - disguising himself as a chaplain, speaking with Leo, running through the Chandler Manse with a bunch of grapes dangling from his kisser - not to mention the unexpected great fortune of finding himself in a position to save Adam Chandler's life, and thereby acquire his eternal indebtedness - oh, happy day!

Hook Me Up: Looks like Damon might turn out to be well-connected in Pine Valley, as it increasingly appears that he could be the son of none other than PV mainstay Tad Martin! Since Tad's ex, Hillary, is Damon's mom, and Tad is telling tales of an interlude with Hil before her last marriage, the foreshadowing is heavy enough to sink a ship! Love it!

Just JR: There were some terrific emotional moments during the time that JR was on the brink of death. It was nice to see Dixie with JR and Tad again, but I'm glad to see the ghostly visit come to an end story-wise. Marissa continues to be the weak link for me in all of this, so it was hard to get too excited about her being the reason JR wanted to go on living. Regardless, it was a kick to see JR literally open his eyes and pick up where he left off in the fight to rid the family of Annie - pretty feisty considering he can't even sit up yet! I'm looking forward to more Chandler family drama as long as they keep it real, and keep Colby's whining to a minimum!

What were your favorite scenes this week? Which were your least favorite? Are you looking forward to more drama in the Chandler Mansion - or are you over it? Let Soaps.com know in the space below! Also, check out Soaps.com Chats with All My Children's Melissa Claire Egan!

All My Children: Victor Alfieri...