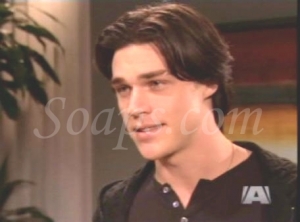 Last week, All My Children continued on without changing my opinion a whole lot on any of the storylines. In spite of the fact that Pratt’s plots are now technically over, the interim writers are obviously still coping with the aftermath. Some of the best actors on the show remain entangled in the remnants of stories that weren’t popular with viewers. Is anyone really enjoying Jake and Amanda’s ongoing obsession with David? Or Frankie’s hand issues? How about Krystal being part of the furniture? Just a few examples where the show could use a jolt and a fresh approach to the characters. Here’s how things shake out:

JR’s Cancer: This is still my fave story by far, but it faltered a little this past week. Brooke’s continued presence at the hospital relegated Annie to the status of a gnat buzzing around everyone’s ears, which I found entertaining for the most part. Of course, Annie played her trump card with Adam – she’s a partial match for JR – and in spite of swearing him to secrecy, will no doubt lord this over everyone at some point in the not too distant future. Incidentally, I thought JR’s reaction to Annie in his hospital room this week was a little bit over the top for a person on his last legs! The questionable portion of this storyline was JR’s visit to heaven – if you’re like me, and roll your eyes and plead for mercy when dying characters go on these ‘magical journeys’, then no explanation is necessary. Of course it was fab to see Cady McClain return as our beloved Dixie (even with the heart-stopping hair tint!), but it’s a pretty overused soap gimmick to have the dying character be ‘tired’ and ‘ready to die’, but be sent back to live life. Up to this point, JR’s cancer story has been pretty fresh, so going this route was a bit of a step down in that respect. Wish they could have somehow brought Dixie back for real instead.

David Double-Cross: It was mildly interesting that David was finally ‘bested’, and I loved his reaction to Gayle holding him at gunpoint, but the plotting and planning by Jake, Amanda, Erica, Ryan, and Gayle all last week just made me feel fatigued. I just wish that these characters could all move on into fresh, compelling storylines that don’t seem ridiculous and/or like a waste of the actors’ talent.

Hubbard Hum-Drum: While I’m riveted to any scene involving Jesse and Angie, and it’s great that Angie is mixing it up with David, I’d like to see the Hubbards get a ramped-up storyline soon. I’m not all that interested in Frankie’s hand or his pill-popping – anyone else have an opinion on this?

Fusion Confusion: I'm hoping for good things out of the battle for Fusion, but will admit to being a little worried that it might be nothing more than a snipefest between Erica and Greens with no substance. Bringing Madison and Randi into the mix may make it more interesting, guess we'll have to wait and see.

Damon's Mom: This is fairly exciting stuff! So, Damon's mother is Hillary, who obviously will turn out to be Tad's ex-wife, leading us to ask the burning question - could Damon be Tad's son? It would seem that Tad could hardly have a teenage son from the eighties show up in 2010 - it just doesn't fly mathematically, but that never stopped a soap opera, did it? Either way, Damon is fitting into the canvas nicely, and it's great that he will have some kind of connection.

All My Children has certainly improved by leaps and bounds, but is still frustrating in some respects, as viewers know it can still be much better. The news that Jack will stay is welcomed, and having Brooke on canvas has been the equivalent of a deep breath of fresh air! Kudos to the interim writing team for the difference they have made with these decisions!

What's your opinion on the past week's episodes of AMC? Be sure to let Soaps.com know using the comment section below!

All My Children Snap Poll: Will You...