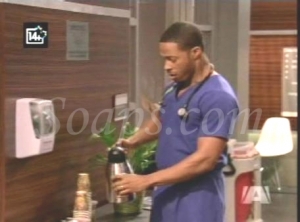 All My Children is certainly improving, and bringing back the character Brooke English sure didn’t hurt! It’s been fabulous having her and Jack back in Pine Valley where they belong. That said, there are still issues to rant about! Let’s see what stood out:

Freaky Frankie: This seemed like a really odd story point to me – Frankie, an adult and professional, was so intent on his parents getting alone time that he decided not to contact Angie about a hospital matter which only required her to make a quick phone call? Then he’s so angry that she won’t let him take the fall for the mistake, that he hits the desk and re-injures his hand? Hardly compelling stuff, and actually, this makes Frankie look like a hot-head at best, and a complete nimrod at worst! Still waiting for better than this…

Damon’s Arrest: This seemed like a re-write to me. The robberies were originally being set up to look like someone else, it seemed, but my guess is the new writers decided to change direction, deal with the issue, and move on.

Turret Trouble: I was about ready to hang myself from the turret window by the time Ryan finally let Greenlee out of there! Boring!

Erica’s Angle: The back and forth between David and Erica was less than thrilling – until Nurse Gayle arrived on the scene – way to go Erica! Good twist in the story!

Adam’s No Fool: Yay! Adam seems to be himself again! On Monday he called Annie and Scott out on their flirting (finally!), and in the hospital he chose Brooke to run Tempo, completely ignoring Annie’s whining and cajoling – that’s the Adam we know and love!

Brooke's Return: This really seemed to re-energize the show! Brooke took no nonsense from Annie right from the start (which I loved!), and her interactions with everyone she's encountered have been warm, genuine, and natural - as though she'd never left! I can't say enough about what this character brings to the canvas.

Marriage of Inconvenience: As Greenlee was explaining to David why she still wanted to marry him (even though she is in love with Ryan), I realized that this storyline is a complete fail where logic is concerned! The interaction between David and Greenlee is great, but it's hard to get excited about a plot that is so dumb! Greenlee is coming across as particularly unlikeable, the revolving door at Wildwind is ridiculous, and we're still contending with Jake's annoying obsession with David. I want to like this storyline, because it logs so much screen time and involves some great actors, but it's been tough.

JR's Cancer: Two big thumbs up! Adding Brooke into the mix at the hospital this week, made a great storyline even better. The interactions between Tad and Adam, Tad and JR, and JR and Adam, have been nothing short of riveting and quite emotionally-powerful at times! Annie skittering around the corridors jealously watching Brooke's easy way with everyone is delicious too! Jacob Young is doing a great job portraying a cancer patient - he comes across very realistic, and not at all like he's 'acting', or making us feel that we've seen it all before. My favorite story this week by a mile!

What are your thoughts on the past week in Pine Valley? If you think things are improving, tell Soaps.com why in the comment section below. Still have some grievances? Air them too!

All My Children: Shannon Kane at...