Dolby: I really had no use for the character of Damon until he got mixed up with Colby. I'm seeing him in a new light suddenly, and enjoy it when he's on screen. The Damon/Colby interactions are a nice little plus for the show!

Liza/Tad/Krystal: I'm not liking what they've done to Krystal lately. She's normally a dynamo, but is being written as a mope who hangs out mainly with Opal. The way this 'triangle' is being written there's no spark between Krystal and Tad - she's just sort of mooning over him, and he's oblivious. Tad and Liza share fantastic chemistry and provide comic relief too - for me there's no contest as to who he should be with at this point. Since Tad and Krystal were once a favorite pairing, I expect to feel somewhat conflicted as to which couple to root for - here's hoping they bring Krystal back to life and heat up this storyline!

JR Cancer Drama: I really enjoyed the scenes between Jacob Young (JR) and David Canary (Adam) this week, and loved how JR's crisis brought the whole dysfunctional clan into the hospital for a series of confrontations! Marissa is still the weak link for me as far as JR's storyline goes, but it has been a treat seeing him interact with the Chandlers again!

Greenlee's Big Day: While this was a bit overly dramatic as plans go, I absolutely found myself relishing the chemistry in every scene between Greenlee and David! What a combo! As for Ryan, it was priceless to see the look on his face when Greenlee phoned to say 'Happy Valentine's Day' - the wheels were certainly turnin'! Although I got a kick out of that scene, it somewhat diminished the impact of Ryan seeing her at the church, but all-in-all it was a classic soap moment, with everyone gasping, "She's alive," and variations thereof. Ryan's eyes just about bugged out of his head as we all predicted and anticipated - excellent!

AMC has taken a turn for the better, but there are still some fast-forward moments and ridiculous things going on in Pine Valley! What do you think about the show this past week - improving, or not so much? Let Soaps.com know in the comment section below! 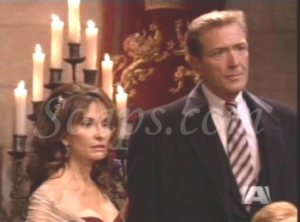 Things are definitely looking up at All My Children, however, there are still some curiously inane plot points occurring. The highlights of the week for me were getting to see more of Jack Montgomery, JR and the Chandlers, and Greenlee revealing herself – fun!

Erica/Ryan Break Up: This was about as dumb as it gets. After all the weeks of churning emotion and self-examination culminating in the pair deciding to make a go of it publicly – they up and decide to end it in about thirty seconds just because Jack shows up?! If I remember correctly, Erica began flirting and going out for dinner with Ryan before Jack ever left town – so why would it suddenly matter to her what he thinks? Obviously it was a storyline adjustment necessary for the writers to move on in another direction from this patently unpopular pairing, but the way it went down was totally unrealistic.

Please Move On: I have all my fingers and toes crossed in hopes that David’s new drama with Greenlee will mean that we never have to hear another argument between Amanda and Jake over him – it’s really gone beyond annoying and makes them nearly unbearable to have on screen. Even their potentially romantic Valentine’s Day scene was ruined over David – enough!

PVPD Antics: So Jesse lies to David, telling him that Jake gave a statement placing him in the elevator at Fusion (Jake had actually backed out of that statement), and then Natalia offers herself up on a silver platter to get information from a slick computer hacker? Makes you want to walk up to a brick wall and bang your head against it a few times, doesn’t it?

Colby vs Annie: Even though this rivalry has moments where it seems rather contrived, it really does have potential. I must admit, I have no idea why Annie would be back to kissing Scott at this point, but here’s hoping he will stop being so wishy-washy one way or the other – either join Team Colby or seduce Annie – make your move, Scott!

All My Children Saturday Teaser Poll: Held Against Their Will!

All My Children: Susan Lucci on HSN! 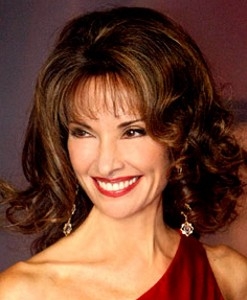