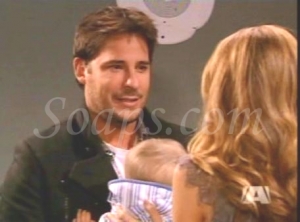 First and foremost, I would like to take a moment to mark the passing of James Mitchell, one of All My Children’s most accomplished actors, who played one of the show’s most memorable characters. I’ll never forget staying home from school and watching Palmer Cortlandt try to control his daughter, Nina, and her husband Cliff, or his legendary run-ins with Opal! What a blessing that we all got to see him onscreen one last time during the 40th anniversary episode. Rest in peace, James, you will be missed.

As for All My Children this past week, we were treated to some good acting, some funny scenarios, and, well, some more ridiculous storyline points. Par for the course lately! Here are a few comments from the peanut gallery:

Go Greens: Thank goodness Greenlee finally took some steps! I’m so over her incessant dreams – one or two would have been sufficient – let’s get this girl home! As for David, the fab acting of Vincent Irizarry really made you feel the character’s personal struggle and frustration in the scenes where David came clean to Greenlee – bravo!

Taking Credit: While I don’t believe for a second that devious Madison has completely changed her ways, I can understand why she would suggest that Randi take credit for her idea. What I can’t figure out is why Randi would want to take credit for Madison’s idea! Randi has a tendency to really rub me the wrong way when she comes across as shallow or dim-witted – I would have had some respect for Randi if she had told Erica the truth – that the non-profit line was Madison’s idea.

Stop Going There: I was cheering Erica on Friday when she asked Opal why she had to keep ‘going there’ – prying about Erica and Ryan being a couple. She’s been like a dog with a bone this week – get a life, Opal!

Accidental Double Date: I’ll admit to brief enjoyment of the scene where Tad and Liza walked in on Krystal and Rob, but to be frank, I wasn’t paying very close attention – I was preoccupied with the horrible blouse that Krystal was wearing! It was a nightmare in salmon! Totally the wrong shade for her, and too matronly for her fabulous figure – worst wardrobe blunder I’ve seen in many moons…although, admittedly, I did also raise my eyebrows at Erica wearing a sleeveless dress and knee high boots at Fusion – it’s wintertime in Pine Valley, woman!

Marissa’s Misery: Well, I’m going to be diplomatic and say that this character isn’t convincing as an angry or miserable person who has just received bad news. She was even sort of smiling when she spoke to JR about how devastated she was over David’s deception. Marissa comes across like a princess character in a Disney movie – they just don’t do ugly or gritty emotions much.

Adam's Will: How ridiculous is this storyline? I can't believe that Adam would so blatantly try to control his family members. From what I remember, Adam has always been very crafty and clever - he would never need to be so obvious - so why do they have him resorting to behavior that is beneath him? We haven't even heard what Annie's stipulations are yet, but do we really care? Yeesh.

Like Old Times: Tad and Liza are having fun, and so are viewers, thanks to their chemistry, and Michael E. Knight's ability to spice up any storyline with his one-liners. They have provided a much needed bit of fun on AMC lately. Hope it keeps up!

Jake! You ARE the father: This was great for those viewers who haven't had their Maury Povich or Jerry Springer fix lately! Of course most knew ahead of time that Jake would be the dad, but knowing took nothing away from the emotion of the reveal. Ricky Paull Goldin did a great job with the material - I really did get choked up!

Do you have any theories about who is behind the rash of break-ins? What did you enjoy most on the show this week? Are you anxious for Greenlee to get back to Pine Valley? Be sure to leave your opinions on AMC for Soaps.com in the comment section! If you haven't voted in our Teaser Poll, be sure to check it out.

All My Children: Tribute to James...