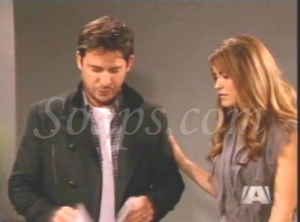 Well, the good news is there was more than one thing I enjoyed about All My Children in the past week. The bad news is that there were only two – the rest is still relatively awful. At one point this week, throwing things at the television set became a viable option! Here’s what made an impression this week – beginning with the stuff that was irksome:

The ‘Throw Stuff at the TV Moment’: For me, this came after Amanda had been hysterical for a day or so over the possibility of Trevor having the genetic marker for David’s blood disease. She vents all over poor Jake and Angie, then when they tell her he can be tested with a simple DNA test, she changes her mind, basically saying, “Well, what if I don’t want to know, now?” Arrrrggghhhh! I actually yelled, “Oh c’mon!” at the screen. If I could have slapped her, I would have. Utterly vapid writing!

JR’s Illness of Convenience: Is it me, or are the effects from the chemo rather inconsistent? One minute, JR is shivering, convulsing, and pale as a ghost on his living room sofa, to the extent that his young son thinks he’s going to croak on the spot. The next moment, JR is looking quite healthy and dapper, standing in Adam’s hospital room, arguing and glaring daggers like his old self! Yeesh.

Erica and Ryan: Many viewers wish this would just go away, I know. I’m fine with it, but not with the sudden onslaught of Greenlee references now intertwined through every scene and interaction they share. There was none of that before, and now there’s so much of it that it’s cheesy and annoying!

Annie/Colby/Scott: I was hoping that this might develop into something interesting, but I’m still waiting. NuColby is turning out to be shrill and exasperating to watch, Scott is still wishy-washy, and his fantasizing about Annie is, frankly, giving me the creeps! Watching through the window while she dances for his uncle, and then returning to that room to think about her doing it for him? Too much information, I think. Yuck! Annie needs a worthy rival and a man much more determined and forward to make this entertaining!

What a Doll, Madison: I simply cannot believe that Madison has suddenly changed her spots. My theory is that she is playing Randi like a fiddle - killing her with kindness. Madison wants Frankie, I'm sure of it! We'll have to stay tuned to see if I'm right!

You're Bad, But You're Good: One of the things I'm enjoying are the scenes between Greenlee and David. These two accomplished actors can make whatever is written become watchable - thank you! I love the idea that David has confessed everything to Greens, and she mocks his devious plot, rather than becoming self-righteous and judgmental. Now let's get her out of that hospital bed!

Crank Up the Romance: The thing I'm enjoying most about AMC right now is Tad and Liza's burgeoning romance. As I've noted before, they have great chemistry. Their arrival saved the scenes in ConFusion where Jake and Amanda had just been serenaded by the tuba player (help us). Even the insipid scenes with totally pointless characters Bailey and Damon were good because of Tad and Liza's pull toward one another. I'm looking forward to seeing what comes next for them.

Things are looking up at All My Children for 2010! Be sure to use the comment section to share with Soaps.com your own thoughts on the show, and your hopes for the year ahead!

All My Children: Changing Children!