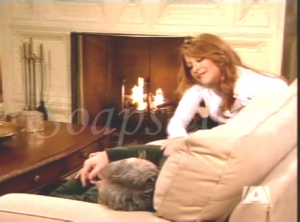 Well, Soaps.com readers, this past week brought us the long-awaited episodes celebrating the 40th anniversary of All My Children, as well as three new episodes. According to the polls taken by Soaps.com, the majority of viewers weren’t impressed with the handling of the special episodes, or at least thought they could have been done better. Let’s take a look in depth:

Hayley’s Return: I loved the return of Kelly Ripa as Hayley – her interactions with the other characters had me interested in every scene – she’s top notch! Her eye-rolling, tongue-clucking, seen-it-all-before attitude where Adam’s wedding was concerned was perfect – as were the delicious exchanges she shared with Annie. That’s the good news. The bad news is that talented and gorgeous Mark Consuelos (Mateo) was relegated to wallpaper status, and that scenes of Greenlee’s and Madison’s storylines were randomly stuck in here and there – we could have done without that.

The 40th Anniversary Episode: I was disappointed in the very short snippets of time designated to the former stars who returned. It really felt like a letdown after all of the hype. Although it was fabulous to see favorites like Brooke, Greg, Bianca, and Maria, it was certainly a case of ‘don’t blink or you’ll miss them’! I really didn’t appreciate all the time alloted to those we see every day reiterating why they are in Pine Valley – it felt like they were trying to convince us of something… On a positive note, it was fun to see the flashbacks, and to see how some of the former stars look now. The very best news of all was that Brooke’s cryptic words, ‘someone better warn Erica,’ proved to be true when two days later it was announced that Julia Barr will indeed be bringing her character back to the AMC canvas! Woot!

Marvelous Madison: I think this is supposed to be a storyline designed to make us revise our opinion of the once-evil socialite, but the story has lost whatever momentum it had, and it’s just odd that she’s cozying up to Angie. Has anyone else noticed that she’s still eyeing-up the very-married Frankie like he’s dessert?!

Dreams Becoming Nightmares: In other words, as with most AMC plots recently, Greenlee’s incessant dreams are starting to grate on the nerves. When it begins to feel like the writers are merely trying to fill airtime, it’s not good. Her scenes with David are very interesting though – a complex relationship means a side of David we don’t often see – I like that.

Custody Chaos: What kind of custody hearing was that?! The judge has heard enough and is ready to rule based on what, exactly?! Hrmm… Any bets as to which way she’ll go on this?

Jake and Amanda: It's sad that all that's left of this couple is Jake harping (about David), Amanda mewling and cajoling (about David), with the odd bickering match and daydreaming session thrown in for good measure. In a word, they're annoying, and their scenes and dialogue have become predictable. I want better for them.

Opalvision: How many visions and feelings has Opal had in the space of the last week or two? Now she has the power to walk into Erica's home and sense that she's been doing the nasty? Oh my!

Chandler Chicks: The Colby/Annie face-off didn't do much for me this week. It seems like phony conflict. It might be more interesting if Scott gets off the fence and becomes embroiled in the mess to come. By the way, I still can't understand why the former Colby was replaced...

Erica and Ryan: I've had the same opinion on this all along and it hasn't changed now that they've made love. I like their chemistry, but it's too weird that he's been with her daughter, and that she's his son's grandmother, and he was married to her ex-husband's daughter - there are times when you should just say 'no'...

Baby Drama: Bailey and Damon are dead wood - cut them loose. Either give Liza back the baby and have them leave Pine Valley, or have them take the baby and go. Either way, the characters are contributing nothing of value to the show at this point.

Best for Last: How about that Liza and Tad pairing? I'm loving it. They have great chemistry and play off each other in a teasing way that is quite entertaining. Their interactions are one of the things I look forward to seeing on the show these days!

What are you liking or disliking on AMC in the past week? What were your impressions of the 40th Anniversary shows? Be sure to leave your two cents below in the Soaps.com comment section - whether you agree with me or not - it's all good fun! If you haven't already, be sure to vote in our All My Children Saturday Teaser Poll!

All My Children Video Clip: Amanda...