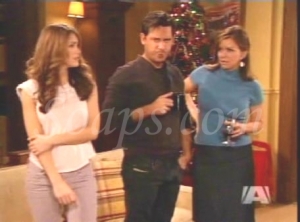 It’s a short week again for All My Children, but a bit of an important one as Kendall and Zach returned, then said goodbye, Joe and Ruth Martin departed, and presumed-dead Greenlee came back to life! Here are some observations on the past three episodes:

Those Wacky Martins: Seems Tad has a bit of Opal in him – he’s sure had an awful lot of ‘instincts’ he’s been following lately! But that wasn’t the only weird thing happening at the Martin household over the holidays – we were provided with a scary visual courtesy of Tad, who gave Joe a red speedo for Christmas, we witnessed a bizarre dialogue between Tad and Jake in which they actually spoke over one another for their entire conversation, and we were treated to another one of Opal’s bizarre premonitions. Don’t you love how no one in the Martin house is fazed by Opal’s predictions of doom? Jake nonchalantly asked what she ate, and Krystal quipped, “If something’s coming to Pine Valley, it had better be Tad!” So funny! I love this bunch!

Zippity Zendall: Wow, that was some rushed and bizarre writing for this couple. No sooner did they return home, then they packed their bags to leave again! Stopping only for a quickie, to negotiate Spike’s release from Ryan, and to share a melodramatic moment with Erica, they couldn’t get out of Pine Valley fast enough! Strange. One would think that the last thing Kendall would want to do would be leave home after being on the run. What about their businesses? Sigh… While I’m sad to see beloved characters go, they haven’t been written very well lately, so it makes it somewhat easier to take. Zach’s farewell at the door was certainly a tear-jerker moment though.

David’s Miracle: A more shrewd Martin clan might have picked up on the fact that David hasn’t had any fatigue lately, nor has he been collapsing in fits of fever due to the side effects of his ‘illegal drugs’. Instead, he was looking positively healthy up in Gloucester while taking on Tad and Liza! While it’s nice that he has nursed Greenlee back to life, it’s all a little ‘Dr. Frankenstein’ for me…but I’m looking forward to the scenes between Greenlee and David who have great onscreen chemistry. Down the road, I’ll be waiting to see Greenlee’s reaction to the Ryan/Erica pairing! Could there be a cougar/cat fight in store?

Annie Overload: I'm so over Annie and her shenanigans, and Adam and his machinations on her behalf - has he been brainwashed? The one thing I did enjoy this week was NuColby's attitude toward Annie, and I'll admit it piqued my interest when Colby asked Scott to help her come between her father and Annie - if only Scott weren't so wishy-washy... I actually laughed along with Erica when Annie showed off her new personal trainer and then offered her some 'divine' scones! Erica was right on the money when she said it was funny watching Annie try to play lady of the manor! I think Adam and Annie have just logged too much screen time throughout the murder mystery - they need a break and/or a good storyline! Custody battle with Ryan? Not so much...

Hayley Invasion: I'm so looking forward to the 40th anniversary episodes! The excitement of seeing everyone's reaction to seeing Hayley at the door of the Chandler Mansion will have to carry us through until Monday!

Well, what can you say? AMC is still working through the Pratt scripts, so the writing is much the same. On the bright side, I had quite a few laughs this week, and have much to look forward to on the show next week!

Here's hoping all Soaps.com readers have a happy, and safe, New Year's! See you in 2010! Feel free to leave your comments about the show, and New Year's greetings, in the space below! Check back with us on Saturday for a new Teaser Poll!

All My Children Video Clip: Sneak...