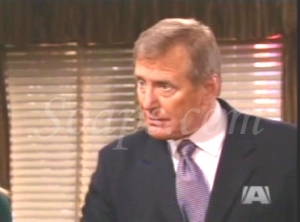 At this point, like many other viewers, I feel as though I’m simply along for the ride as the remainder of Pratt’s All My Children storylines play out. For the most part, the plots continue to be ridiculous, but it is somehow more bearable knowing that there is an end in sight. Here’s a few observations on the past week:

Mad Dad: The actor playing Madison’s father did a great job with his part – seemed like a typical smooth-talking businessman until he rocked those creepy eyes every time someone showed up unexpectedly or said something confrontational!

Most Annoying of the Week – Tie – Randi and Amanda are soooo ditzy!

Annie Gets Her Man – Annie knew exactly what effect refusing to put Adam on the stand would have on him! And how about that trial? What exactly did the Crown have to go on to begin with? None of the so-called witnesses really had anything to contribute except dislike and distrust of the defendant! Back home, Annie’s ability to manipulate Adam with the pouty face is just cringe-worthy!

Super Zach to the Rescue: This week, Aidan was officially 100% unrecognizable - not to mention there was never any truly plausible explanation given for his sudden extreme Jekyll and Hyde routine - Greenlee's death? That's pretty weak considering he wasn't even with her at the time, and that he's been fine since she died up until he and Kendall went on the run! I'd hate to think that his character was sacrificed simply so that Kendall and Zach could experience one last conflict/reunion, but it appears that's exactly what occurred! It was also completely ridiculous how Zach went from despising Kendall, to deciding to become her savior in the space of one conversation with Erica - it negates the depth of all the feelings he's been showing us the past two weeks! That said, it's always satisfying when a couple is reunited - this was no exception.

Double Dating: Tad and Krystal double-dating with Rob and Liza? Just weird. At the party, though, Tad and Krystal reminded us why they are two of the most important treasures that AMC possesses - so funny, and such great actors. Kudos!

David's Bash: So, the devilish doc, who is supposedly dying and is on a veritable cocktail of high-risk drugs, arrives at his party and orders himself and Amanda a couple of dirty martinis?! What?! The idea of him gift-giving as a means of making amends is hilarious - even funnier is the recipients actually accepting gifts from him!

I'm anxiously awaiting the 40th Anniversary of AMC, coming up in the first week of January! It will be fantastic seeing all those familiar faces! Check out the AMC Comings and Goings to see who will be in Pine Valley!

What did you think of the past week's storylines? What are you looking forward to next week and in the New Year? Let Soaps.com know your thoughts in the space below! Did you vote in our All My Children Saturday Teaser Poll?