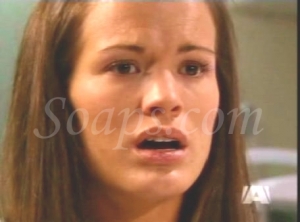 Although we’re still mired in some pretty bad storylines on All My Children, there were some instances of good acting and great chemistry that stood out this past week. Read my thoughts and see if you agree!

I’m a Mess: I laughed out loud when Kendall told Erica that she couldn’t return to Pine Valley because she was a mess (I was thinking, “Just like this storyline!”). What a disastrous turn things have taken with the character of Aidan – there are no words for how much I detest the destruction of his character – it’s not as if it is happening for a good reason, such as a worthwhile storyline! The story itself is inane and makes little or no sense. The scenes in the hotel were utterly ridiculous; although La Lucci did cause me to choke up a little when she told Kendall she’d never give up on her. I genuinely hope that the new writers find a way, down the road, to bring Aidan back and redeem his character. Shame.

David’s Dying: Too ludicrous to be believed – as if Amanda wasn’t made to look stupid enough by having sex with David, she’s now buying his latest scam hook, line, and sinker – which conveniently came to light the moment she decided to move out of Wildwind! The fact that David so easily dupes Jake as well makes this downright farcical. I’m so looking forward to some halfway intelligent storylines where the characters behave realistically – this is off the wall. On a positive note, Vincent Irizarry does a great job as David – really laying on the guilt and regret factor with Amanda – hilarious!

One-Day Trial: Adam’s trial had to be the quickest murder trial in soap history! Reality has completely gone the way of the dinosaur on AMC these days! In any case, it’s probably a blessing that we didn’t have to sit through weeks of testimony only to have the inevitable outcome. The best things to come out of all of this were the scenes between JR and Adam afterward – two very accomplished actors are always enjoyable to watch.

Annie Baiting: Okay – if I’m not mistaken, Ryan was at Annie’s bedside when she was in her coma last week, apologizing profusely for making her life so difficult. But the moment she regained consciousness, he immediately picked up where he left off – baiting and threatening. Argh! It’s just so repetitive and annoying!

Zach Attack: Well, Zach has let his personality lapse to the level of a neandrathal, and now he’s going to destroy everything Kendall holds dear so she has nothing to come back to – ho hum. Does this mean Ian too? Just asking…

The Waiting Game: I don’t understand why JR would wait to receive treatments for his cancer – this is directly opposed to anything he’s been crowing about up until now and makes no sense. He has a young son who he is worried will end up without a father, so he puts off treatment? How are we supposed to relate to this story?

NuColby: Natalie Hall is doing a pretty good job of jumping in there as Colby. She is a good recast, although she's not that much better, or different, than Brianne. Oh well, bygones…

Opal: She's a reason to tune in on her own - loved her telling Krystal not to turn down the man with 'buns of steel' for a date!

Tad/Krystal: I'm confused - weren't they making out after Thanksgiving? When did they decide that it wasn't worth pursuing? The writing certainly jumps around…

Poor Madison: Not only has she been beaten up and nearly run over by a car, but now she's got Erica in her face relentlessly! Yike! It's an interesting twist having these characters overlap into one another's storyline though - might be worth seeing where this goes.

Bailey Baby: Another clueless female - does she really think Damon has done a complete turnaround in such a short time? Of course, in PV right now anything's possible. I thought it was strange, though, that Colby went so haywire over the whole thing - that was a surprising choice.

Liza: Best reason to tune in this week. Not only did Jamie Luner do a great job with the material involving the Baby Stuart storyline, she did well in the courtroom scenes, and shares fantastic chemistry with Michael E. Knight as Tad! I would love to see them become involved if for no other reason than to give him more to do than beetle around Pine Valley giving others advice! I enjoy the friendship between these two, and even though they are older now, knowing their spicy past history bumps this up a notch.

What were your favorite and least favorite things happening in Pine Valley this past week? Share your thoughts with Soaps.com in the comment section!

If you haven't already, please vote in our All My Children: Saturday Teaser Poll to see if you can guess what's in store for this week!

All My Children: Saturday Teaser...

All My Children 40th Anniversary...