All My Children Farewell on The View! 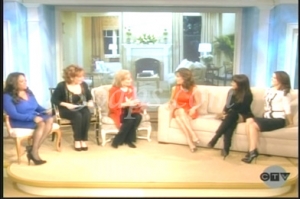 For those Soaps.com readers who were unable to catch the special episode of “The View” on which they said farewell to set neighbors All My Children, we thought we’d provide a quick recap!

The show opened with creator Agnes Nixon discussing AMC, and the female cast members were brought out. Agnes discussed the behavior of Erica Kane (Susan Lucci), and how she doesn’t just want to be told somebody loves her but she wants to hear it repeatedly! Debbi Morgan (Angie Hubbard) talked about her history as a black woman on AMC, and commented that she has been on air more than any other black woman in the history of soaps – she gave Agnes kudos for that.

Soon, the male cast member of AMC came out. Cameron Mathison (Ryan Lavery) reminisced with host Sherry about sharing a dance on the last show they did together. There was joking about Cameron's constant nakedness on the show, and Michael E. Knight (Tad Martin) joked his nick name is 'snap' because they had to change buttons to snaps, because he was always taking his shirt off and fumbling with buttons.

Next up was a skit in which someone was stealing memorabilia from the cast members' dressing rooms. Jacob Young (JR Chandler) said the AMC book was missing, Susan Lucci claimed her Emmy had been taken, and someone had made off with all of Cameron's tight t-shirts! At the end of the show, the Mayor of New York appeared with all of the missing items, and teased that he would be keeping them so that All My Children would have to stay in his city. Last, the entire cast came out to say farewell.

Did you catch this episode of "The View?" Share your impressions with Soaps.com staff and readers in the comment section below!

All My Children: Saturday Teaser...

All My Children 40th Anniversary...