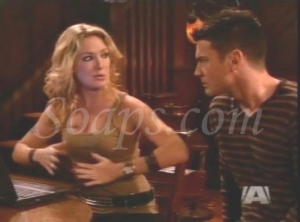 All My Children’s version of November Sweeps fell short of the mark this week. The characters are a mess, and the stories are mostly disappointing. Thank goodness for the casting news regarding the return of many popular names from AMC’s past to help celebrate the show’s 40th anniversary in January, which was the highlight of the week. Let’s look at what happened on the last five episodes:

Adam’s Heart Attack: Well, first there was Zach, shoving JR out of the way to perform CPR on Adam himself so he wouldn’t die without confessing first – security anyone?! Then there was the mega-cheesy trip to purgatory, which did offer a nugget of entertainment with Vincent Irizarry as the ‘devil’ – he looked great! Then there was the trip to the hospital, where Adam lay prone on a stretcher while his ‘angel’ traded yearning looks with his nephew Scott as he slipped the wedding ring on her finger. Scott’s integrity as Stuart’s son is toast, and who knows what Annie really feels – the writers have her doing all this contradictory stuff! It’s frustrating trying to relate to, or understand, these characters.

Aidan/Kat/Kendall: Speaking of characters being destroyed, how about Aidan? He’s behaving so out-of-character that it’s laughable (not in a good way). Kendall is a giant, whining, pain in the rear – why would two men be fighting tooth-and-nail to be with her in the first place? Viewers can’t support what doesn’t make sense. Kat is an interesting character, but how she’ll fit in after Aidan’s gone, I can’t imagine.

Erica/Ryan/Zach: Their quest for justice has become as unbearable as every other dragged out aspect of AMC these days. Who doesn’t want to pull their own hair out at the roots every time one of them utters their repetitive lines about ‘bringing Kendall home’, ‘protecting Emma’, or ‘getting to Adam’? They’ve all become morons with one-track minds.

Amanda/Jake/David: Well, what can you even say about this storyline? Just when you thought it couldn’t get worse, the writers take away Amanda’s last few IQ points, make David even sleazier, and drive Jake into fast-forward territory with his ‘if we just believe in our true love’ drivel. There are no words.

Liza/Bailey/Damon: Bailey and Damon are unentertaining bores. Does anyone really care about them, or what they do next? I’d like to see Liza get involved in something more interesting.

The Hubbards/Madison: While Frankie and Randi were definitely hot in their honeymoon scenes, they were definitely NOT in their scenes when they discovered Madison in their apartment. I was stunned by how completely unrealistic their reactions to a 'dead' person were. Jesse, formerly one of the best characters AMC ever had, has been written without his usual backbone, kowtowing to everyone all over town. Now he can't even arrest Madison without being bested by a pair of goons - give this man back his mojo!! Anyway, I'm glad to have Madison back for reasons I can't even explain - she's an interesting character with a past that makes you feel something - perhaps that's why.

JR in ConFusion: Color me confused. Why is it that JR tells Erica and Ryan to get lost when they grill him about Adam being the killer, but later, when Zach comes back, JR takes Zach's crap and Liza has to get involved? Zach's lucky JR didn't sucker punch him for getting in his face like that. Zach is another character who has been diminished - he's been written as an arrogant caveman-ish bully!

Annie's 'Miscarriage': So predictable, and such an obvious ploy to drag the Stuart's murder storyline out even longer. It's becoming torturous. The jaw-drop moment when Ryan was told that Annie was actually pregnant was good - there's no denying that - but where do we go from here - another month of the three musketeers badgering Annie, Adam, and Scott? So over it!

All My Children is in rough shape. The version of AMC with strong, well-established, memorable characters, and must-see storylines is what viewers are looking for to return. I honestly do tune in every day hoping to hear a couple of great one-liners, or to catch a really intriguing storyline twist, or to see excellent chemistry between two characters - anything that would make the episode worth watching, and give me something to rave about in my column, but it's just not happening lately. AMC has the talent and the history - there's nowhere to go but up!

What were your impressions of the past week of All My Children? Be sure to share them with Soaps.com in the comment section below!

All My Children: Susan Lucci Grand...