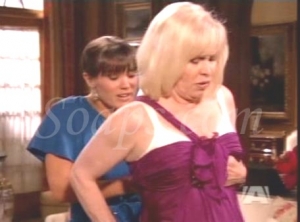 Well, you know things haven’t improved when the AMC Soaps.com Poll is asking viewers to decide the most ludicrous scene of the week on All My Children – and nearly every storyline is represented! Let’s take a look at what happened this week on the show:

Aidan/Kendall: It irks me to no end to have the writers ruining Aidan’s character before he’s sent off the show entirely. What are they thinking? What on earth would the man want with Kendall anyway? She’s like a Chatty Cathy doll with no ‘off’ button! Realistically, the only thing Aidan should be wanting to do with Kendall right now, is find a way to shut her up when she starts blathering on about Zach – how much more unappealing could she possibly be?! So, none of this makes sense, including the pair of them going to a motel under the circumstances. Moreover, we’re now supposed to believe that Aidan has a secret identity or something? Yeesh.

Adam and The Gang: I’m completely over Zach, Ryan, and Erica trying to intimidate and wheedle confessions out of others – this has gone on waaaaaaaay too long! While I understand their motivations, I’m just tired of watching the same old thing day in, and day out.

Annie/Scott: The elevator scene was ridiculous, as is the whole idea that Scott, who has always done the right thing, would be involved in any of this baloney. Annie gets little sympathy from me, simply because of how she’s messed with Emma’s mind, all in the name of marrying power and money – don’t tell me she truly cares about Adam, because we all know she’ll take Scott for a test drive at the first opportunity – once she’s secured her future fortune.

David/Liza: One scene I actually enjoyed this week was Liza shutting David down. The chemistry between the two makes viewers sit up and take notice, and then we get to enjoy watching her string the smooth-talking doc along just slightly, before turning him down flat – such satisfaction! Liza is one of the best female characters on the show right now – she’s confident and assertive without being an over-the-top witch. Women don’t have to be throwing temper tantrums every other scene to be ‘strong’!

Jake/Amanda: Well, when I began watching AMC again back in early Summer, I really loved the dynamic between this pair, but the writers are effectively working to kill that feeling by miring them in this stupid storyline, and by dumbing-down Amanda, who seems to have caught Kendall’s incessant whining disease!

JR/Marissa: Now that JR is inexplicably in remission (after all of two or three chemo treatments), I’m begging the powers that be to give him some sort of new storyline without his wife. JR with Marissa equals flat out boring.

Angie/Jesse: Great scenes between these two this week - whatever the writers hand them, they manage to make it enjoyable - they never disappoint onscreen together! Angie needs to prove why she's worthy to hold her new position and forget about how she came to be there! As for Jesse, he needs to get himself out of all these messes with his friends and get back on track! I'd like to see him lose patience with Ryan, Erica, and Zach, and then take control of Stuart's murder investigation and accomplish what none of them have been able to do thus far - get the confession and close the case! Jesse needs to get some mojo back!

Adam/Annie's Wedding: This whole mess is just crazy. Why would you want your enemies at your wedding? Why would JR attend his father's wedding after the way Adam spoke to him and his new wife recently? Why is Scott allowing his uncle to marry a gold-digger, who keeps coming onto him? Why is Adam going through with this idiocy after learning that Annie and Scott have kissed? (Don't forget - he also saw them pseudo-humping at the dance-a-thon - Adam's just not this stupid!) Why would Emma forget the months of torturous memories and whole-heartedly accept Adam after overhearing one snippet of conversation between him and Little A? Why wouldn't Ryan tell Emma that he knows the truth about Adam and encourage her to speak about it freely - even though she's no longer a credible witness in court, if Emma blurted out what she saw, Annie, Adam, and Scott would be forced to admit the truth - are all three of them really going to damage the kid even more by calling her a liar?!

AMC showed few signs of improvement this week. The highlights, for me, were the scenes containing two of the best-written female characters on the show, Liza and Angie. They are both strong, and come across very realistically in their scenes, regardless of the material provided - they also have good, if not great, chemistry with characters they share scenes with. Krystal is the other female character on the show who gets a thumbs-up in this department. These are the type of strengths that should be the building blocks used to turn the show - character-driven stories surrounding the well-written and developed characters who already exist would be a great improvement on the plot-driven sub-par stuff we've been seeing.

What's your opinion on the past week of All My Children? Share your thoughts and opinion with Soaps.com in the comment section below!

All My Children: Cameron Mathison in...

Former All My Children Actress Leven...