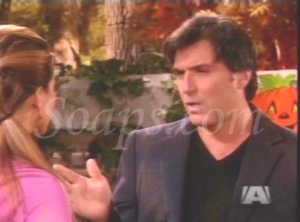 The best thing by far and wide about All My Children this past week was the Halloween costumes. Those familiar with my Rants in the Y&R section, know that I prefer to find the positives, and rave about them when possible, but in looking back at the last week of AMC, there wasn’t much to like. Check it out:

Kendall/Zach/Aidan: I think most of us were sick of Kendall mooning over Zach about two months ago, yet still we’re having this drivel forced on us week after week. As for Aidan, it’s becoming clear that he’s going to leave the show as a big ol’ sap – feeling sorry for himself that no one ever loved him the way Kendall loves Zach, yada, yada… This is not only out of character, but a disappointing send off for such a popular character.

Amanda/Jake/David: I can’t imagine how this story could get any more ludicrous. What’s to stop David from reneging on all of his promises once the next baby is born? He’s still holding charges over Jake’s head, I assume. As for Amanda, what a ditz! 82% of Soaps.com readers polled said they would never sign David’s contract in her situation!

Stuart Murder: I just realized this week that this murder occurred back in the summertime when I first began writing for the AMC section of Soaps.com – and here it is November and it’s still dragging on! Audiences just don’t have the attention span to stay interested in a tale that takes that long to resolve. On the positive side, I happen to think that it was a well-written mystery, with lots of twists and turns to keep viewers guessing – it has just been carried on too long. Here’s hoping we don’t have to endure another month or more of Adam waffling over whether to admit the truth, and Zach & Company trying to get him to spill it!

Scott/Annie: What are these two back-stabbers doing kissing in the elevator? Annie’s integrity has already been completely compromised after the way she has manipulated her innocent daughter, but what’s Scott’s excuse? No one was more like Stuart than Scott – he would never cheat with Adam’s fiancée or watch an innocent woman take the blame for a murder she didn’t commit – I don’t even recognize Scott anymore!

Erica/Ryan: Watching Ryan and Erica debate about ‘protecting’ their daughters has become quite tiresome. The Erica and Annie scenes are sometimes still a kick, but even this gets repetitive.

JR/Marissa: This cancer storyline could have been a really powerful tale, and I was really looking forward to Jacob Young rocking this storyline, but it’s all been watered down – as predicted – by having it become about him and Marissa. They have no chemistry – wake up call – this is not a ‘great romance’ (the majority of Soaps.com readers polled were not onboard with this couple), and the Marissa character continues to be written very unlike a ‘real’ person. As I’ve said before, at the outset of this story the scenes with Tad and JR were great, and it all looked quite promising, but it has deteriorated into a predictable, formulaic series of scenes to push the Marissa/JR pairing – too bad.

Natalia/Brot: I find the dynamic interesting behind this pairing, and I think they could be a great couple, but I wish they'd stop writing Natalia like an overgrown spoiled brat. Every time she opens her mouth she sounds like a little girl with a pout who is stomping her foot on the ground because she's not getting her own way - she grates on the nerves. Why not write her as a confident, strong, young woman? Angie and Liza are two female characters who come to mind, who don’t have to throw tantrums to appear 'feisty' or 'strong' - there's a big difference!

Bailey/Damon: Another storyline to fast-forward. Maybe I'm just bitter about the loss of characters with substance and potential, such as Taylor and Aidan, in favor of newbies, but I found Damon annoying and abrasive from the moment the insipid Bailey let him into Liza's house! I hope these two leave town together - soon. I did love Liza's line to Bailey at the party though, "You left my baby for a booty call?!" Too funny! Nice to see Liza tell Jake to deal with his own stuff too!

The Costume Party: Awesome costumes! I thoroughly enjoyed every one of them! At least the costume department over there knows what they're doing - I'd venture to say they outdid every other soap this year! Krystal belting David was great too - best scene of the party!

All My Children has some great core characters to build around, and something needs to change with this show - it's just not very good on the whole. Personally, I would much rather see a scaled-down AMC cast containing really compelling characters that I care about in quality storylines, than a big cast of newbies in predictable, dumbed-down, dragged out stories. That would be a start.

Do you have any ideas about how All My Children could improve? Do you have comments on the past week of the show? Share them with Soaps.com in the space below!

All My Children: Watch for Michael...

All My Children: Eden Riegel Tweets...