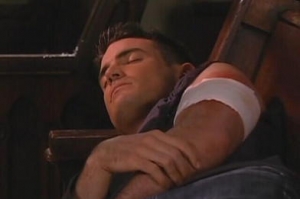 Hello All My Children fans! This week’s show sure did have some big moments-some good, some bad and some just downright strange!

First and foremost-Stuart’s killer was finally revealed. The killer was none other than his own brother, Adam! The reveal seemed anticlimactic after months of dragging. I hope that what follows will be interesting. Hopefully, the writers will explain very quickly how and why this happened. For example, what was Scott’s involvement? Why would he hide who killed his father? I also have to wonder how Annie figures into this entire mess. What sort of a mother would force her own daughter to keep such a secret and why? I wanted to throw something at the television when she sarcastically referred to Ryan as, “Father of the year.” Annie also might want to consider a career with the CIA. She manages to sneak in and out of homes and scale walls without a hair falling out of place!

I was really disappointed in the Kendall and Aidan scenes this week. The two of them being on the lam together could have produced some interesting moments. Watching Kendall feed Aidan soup fell flat. The most ridiculous moment was when Aidan suddenly disappeared and then reappeared with a laptop computer stolen from a police car! Aidan was so concerned with Kendall’s handwritten letter for Zach leading the police to them, but a stolen laptop would not? He also said anything sent on the laptop would be untraceable. How is that even possible? Of course, it’s taken the police months to discover who really killed Stuart, so Aidan is probably correct not to worry.

Speaking of Kendall-I really did feel for her when she was recounting with Aidan everything she and Zach recently have been through. She explained how things fell apart when she woke up from her coma-having her brother’s heart, discovering Zach fathered Bianca’s baby, Greenlee dying, the mess of a hookup with Ryan, Liza, and the list continues. She said, “Everything was just so crazy when I woke up.” She couldn’t have summed it up better! Knowing that Thorsten Kaye is leaving the show, I also have to wonder how everything will play out for her and Zach. A happy ending for them seems impossible and it makes me sad.

There was one happy couple in Pine Valley, though. JR and Marissa got engaged and married in a microsecond, much to the dismay of their loved ones. I didn’t think it was fair for Adam to tell JR that he dragged Babe down and would do the same to Marissa with his drinking. Can’t a parent just be happy for their child? However, I was happy that both Adam and Krystal brought up Babe-it’s only been a year since she died and JR is already marrying again! I suppose the marriage wouldn’t seem so dismal if JR and Marissa had any chemistry. Quite simply, they bore me to tears. My heart went out to Krystal when Tad performed Marissa and JR’s wedding ceremony. To see one child so happy and not have the other one with you must be gut-wrenching.

While Marissa and JR might be boring, at least Marissa stands her ground with David, unlike Amanda! David keeps playing Amanda like a fiddle. Amanda and Jake have great chemistry and light up the screen with their sparks. Instead of an interesting storyline, we’re being forced to watch a dull triangle. I use the term triangle loosely, because in order to have one, there has to be interest in both parties. Amanda obviously is not interested in David and is trying to pacify him for Trevor’s sake. Why would anyone want to be with someone who doesn’t want them? Perhaps because David is Dr. Demento, as Jake affectionately refers to him. The worst moment in this sordid saga was when David asked Amanda to have another baby with him!?! We’ll have to wait until next week for Amanda’s reaction, but my stomach is already turning. I beg the writers to not drag this out as long as they did with the killer storyline!

Lastly, there is Erica and Ryan. There hasn’t been much for them to do other than figure out how to help Kendall. However, they did have a fight over Zach’s involvement and the interesting part was hearing Ryan later admit he was wrong about something! While they are growing close, I wonder how Greenlee is going to fit into the picture when she returns. Kendall had a lot of adjustments to make when she awoke from her coma, but Greenlee’s head will be spinning when she sees her man so close to Erica!

My favorite moments of the show right now continue to be the catty comments between Annie and Erica. With so many dragging storylines and ho-hum events, it’s fun to see these two trade barbs. I loved when Erica told Annie, “There is only so much a designer can hide with fabric.”

Thanks for reading my thoughts on this week’s show! Hopefully, the stories will pick up now that the killer has been revealed and other characters are returning to the canvas. Soaps.com has some of the greatest fans and it’s so much fun to see what you all think, too. Let us know what you think! The fabulous Candace will be back with her witty blogs-so tune in to see what she has to say next Monday!

All My Children Video Clip: Adam...