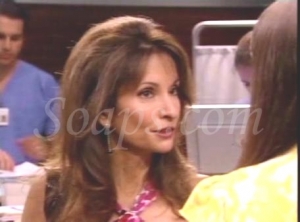 Well, it felt like another week of dragging storylines on All My Children, except for the handful of exciting moments surrounding the switching of Kendall and her double in the hospital, and Kendall and Aidan’s escape at week’s end. Let’s take a look at what happened:

Erica: She’s first on my list of mentions because she seems to be stuck in a revolving series of confrontations – get in Annie’s face, get in Adam’s face, get in Zach’s face, get in Liza’s face, console Ryan, and then start over again… Really, it’s so repetitive! Can’t they find something more interesting for La Kane to do?! And why, oh why, was she wearing a halter top in October?!

Annie: She’s told ‘the truth’ to Scott – so we know she’s covering something up. We also know that she’s manipulating her little daughter to pretend to remain in a coma and hold her eyes shut, in order to protect the guilty party. Mother of the year – not! I hope when the truth comes out, that it is enough to redeem Annie for having gone this far, because if she’s not doing it to protect Emma herself, then it could very likely be Adam she’s protecting (which would also explain Scott’s behavior). If Annie’s put Emma through all of this to hide that Adam’s the killer – well, then it sure looks like what Annie’s really trying to protect is her impending marriage, money, and power! Regardless of who the killer turns out to be, I just wish they would reveal it soon – before no one cares at all!

Kendall: She’s still more worried about getting a confession of love from Zach than anything else! Amazing! I’m hoping that being on the run with Aidan will be interesting, although I’m finding it hard to watch Aidan’s scenes, knowing he’s leaving.

Liza: Well, she made a bad move turning her back on Kendall’s double in the secret room, but she’s made a good move showing such compassion toward Bailey – even though it’s a boring story – it shows the softer side of her personality.

David at the Hospital: How could he treat Kendall if she didn’t want him to treat them? Dumb. I like it when Angie has a go at him, though!

David in the Stable: Ouch! Amanda must have felt pretty satisfied getting to hit him over the head like that - wonder how many times she's wanted to do that in the past few months!

Ryan: He was acting like a neanderthal this week - the way he was getting in Scott's face - he has no right to do that, even if they disagree about Annie!

Brot/Natalia/Jesse: I still can't figure out why Natalia is so ornery about the idea of Brot joining the force. Too bad she shot someone on her first night on shift - with Jesse right across from her! Jesse's become more and more of a joke as law enforcement - he needs some backbone - time to say, "Enough is enough!" It's been like Zach runs the police!

There's not much else to say - with the exception of the escape, it's mainly the same storylines continuing on and on, and repetitive conversations happening between the same people. I'm looking forward to the Stuart murder wrapping up, because then many storylines will be able to move in a new direction. Great news this week about Hayley and Mateo coming back for a couple of episodes in January! Yay!

What did you like or dislike about the past week's AMC episodes? Share your opinion with Soaps.com in the comment section below! Watch for next week's AMC Weekly Blog on Monday October 26, as it will feature a guest blogger - one of our amazing sub-writers, Ally!

All My Children: Kelly Ripa and Mark...