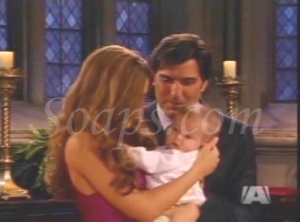 For All My Children, the casting news continues to be more dramatic and interesting than the show itself. On the heels of the Aidan Turner (Aidan Devane) ouster, came news that BethAnn Bonner (Kat) will join the show. This was followed by the puzzling news that Brianne Moncrief (Colby Chandler) had been dumped, and the role recast with Natalie Hall. Of course we have also learned that Ray MacDonnell (Joe Martin) will be retiring, Thorsten Kaye (Zach Slater) has decided to end his tenure with the show, and that Susan Lucci (Erica Kane) and David Canary (Adam Chandler) will continue their roles, along with the infamous list of others making the move to L.A. Wait! There was even more casting news – Rebecca Budig has been convinced to return to the role of presumed dead Greenlee Smythe, and will begin taping scenes in New York before the move. All of this has provided endless speculation as to what the impact will be on the show itself. Writing-wise, this week brought improvements, but still didn’t rise to the level of exciting by any stretch of the imagination. Here are the comments on the week:

Madison/Hubbards: I was pleasantly surprised this week by the move to give us some proper insight into Madison’s background and motivations. This bit of character development bumps the story up a notch, and makes it more worth watching. Even Frankie seemed more interesting as he wrestled to reconcile feelings of sympathy for a woman he had hated. That said, I hope they don’t drag out the Henry North murder much longer – if they’re going to redeem Madison, they should get on with it and move forward with a storyline for her.

Liza’s Baby Mommy: There were a couple of elements of this storyline that I liked this week. I found it quite refreshing that Colby got mad, threatened to leave town, and then got over it – without having it drag on for weeks – nice! I also liked the twists of Liza telling the truth, admitting it felt good to tell the truth, and then – in a shockingly interesting development – inviting Bailey to stay with them and get to know her son! This was an appreciated departure from the expected, and predictable, baby custody fight. This story is moving at a great pace too.

Tad: I’m not thrilled with ‘Tad the Cad’ becoming ‘Dudley Do-Right’. Tad could, and should, be doing any number of more interesting things than going around town crankily giving everyone advice on how to walk the straight and narrow. Thumbs down.

Jake/Amanda/David: This storyline isn’t doing a thing for me, aside from Ricky Paull Goldin’s (Jake) emotional scenes, which have been very good. There were a couple of laughs in it this week – when Trevor peed on David, and when Jake and Amanda joked that David’s always ‘brooding under his unibrow’, but certainly not enough to make it worth watching. The idea of Jake and Amanda doing it under David’s roof is icky, and the writing seems uninspired – it’s basically a game of one-upmanship between David and Jake, with Amanda simpering and whining in the middle of it. Bleh.

Annie's Kidnapping: Okay, I want to know who made the decision to let Aidan Turner go from All My Children - was it a man? Just curious, because the highlight of most female viewers' week was watching Aidan forcefully, and repeatedly, demand that Annie 'give him what he wants'. Raise your hand if you were thinking, "I'll give you what you want..." and you had something in mind other than 'the truth'! Seriously, though, Aidan is a great-looking guy, a strong actor, and a character who many viewers have hoped would get a well-deserved front-burner storyline. So much for all that. As for the rest of this kidnapping story - ridiculous - Kendall standing out in the open without a care in the world, Zach ordering Jesse around like a minion, Erica running between Zach and Ryan delivering messages like a besotted teenager - not worth tuning in to see. Even the kiss between Zach and Kendall left me cold - her nagging, whining behavior has turned me off to such a degree recently that I think he's nuts to still have feelings toward her!

Adam Sees Stuart: I sincerely hope there's an end in sight for this storyline - and soon! These endless flashbacks are really getting old. This storyline has dragged on too long.

Tad/Krystal: As much as I once liked this couple together, the abrupt turn the writers took from building the Tad and Taylor relationship, to putting Tad and Krystal back together, has left me feeling jolted. It seemed just as the writers began to get into a rhythm with the Taylor character, they gave up and dropped Beth Ehlers. Viewers were just beginning to root for the couple and suddenly it was over with little to no explanation. Consequently, it's hard to pick up, brush off, and start investing in Tad with someone else - even Krystal.

Ryan/Emma: Ryan's character didn't do much this week besides bicker with others, and give dire warnings about Annie. He always seems to be kneeling down and getting in Emma's face too. So, not much to say about him, but Emma has been great, and I can't wait to see what all these bungling adults do now that they've caused her to get hurt - shame!

While the show was better this week to some degree, both the writing and casting decisions continue to concern me. With Aidan Turner and Thorsten Kaye both leaving the show, I'm worried about the hot, edgy, leading man factor. Cameron Mathison certainly looks the part, but his character, Ryan, seems to be unpopular with a majority of viewers. We really need some great couples, characters, and stories to invest in on AMC - the elements that make us eager to tune in each day, which is not the case right now. Ending on a positive note - there were definitely enjoyable aspects of the show this past week - here's hoping October 12 - 16 is even better!

What are your thoughts and observations regarding the past week of All My Children? Be sure to leave your two cents for Soaps.com readers to read in the comment section below!

All My Children: Susan Lucci To Be...

All My Children Casting Poll on...