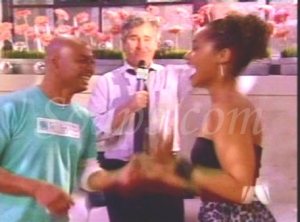 All My Children Rant
Week of September 28 – October 2:

No one in Pine Valley is very happy right now, with the possible exception of Ryan and Erica, and with the comic relief of the Tad and Taylor match up coming to an abrupt end, there’s not much for All My Children fans to smile about! Personally, I’m a little frustrated with the writing, as it’s leaving me with a lot of questions about why characters are acting the way they are – I prefer to be able to relate to them. Also, there is a repetitive, clichéd feel to some of the storylines that is tiresome. Other than Aidan, who’s leaving soon, there’s not a lot I like about the show right now. Annie intrigues me, but I can’t relate to the things she’s doing, so again, it’s frustrating. Some points:

Natalia/Brot: Congrats to them for winning the dance marathon – these were among the only smiles we saw all week! This pair seems to have great chemistry, but I can’t for the life of me figure out why they are writing Natalia like such a spoiled brat?! Just to create conflict between her and Brot? I can’t understand a grown character stomping her feet, throwing a book, or even having a problem with Brot joining the police force. I don’t get it.

Erica/Ryan: At the risk of repeating myself, I noticed again this week that this pair certainly has chemistry, but it’s just too weird with the relationship history. I would have much rather seen Erica re-paired with Jackson.

Adam/Annie/Scott: While Annie intrigues me, I still can’t understand her motivations. Why is she dallying with Scott? Why, for that matter, did Adam sit and watch her writhe all over his nephew and then take her home to continue planning their wedding? I hope all of this makes sense at some point!

Amanda/Jake/David: This story is really getting lame. David and his flowery speeches that just happen to be overheard by Amanda, Jake’s temper and jealousy making him his own worst enemy, and David taking Amanda out to eat at the exact moment Jake shows up with Liza, causing Amanda to think Jake is ‘moving on’. Blah. This has so been done, and is not the least bit intriguing.

Krystal/Tad: Is the only drama in their lives really the relationship of Jake and Amanda? Sad. But not as sad as the virtually unexplained and abrupt ending to the Tad/Taylor relationship, which was really growing on some viewers, and if nothing else, provided a bit of romance and some funny lines. Throwing Krystal and Tad back together all of the sudden (after she's been in the house for how long now?) is jarring. By the way, if Krystal says the line, "David sucks people in," one more time, I'm going to start a drinking game…

Kendall/Liza/Zach/Aidan: The only good thing about the scenes with these characters this week was snarky, cocky, Aidan, who I will truly miss. Zach and Kendall are so repetitive and boring to watch interact, and jealous Kendall lecturing Liza is no fun either. If I was Liza, I think I might have told the ADA the truth!

JR/Marissa: I didn't mind some of these scenes, but that's mainly due to Jacob Young's acting as JR. I'm still not connecting with Marissa and JR as a couple - the cancer storyline scenes between JR and Tad were much more compelling!

Madison/Hubbards: I don't know what to make of Madison's sudden about face. Instead of relishing all of the misery she's causing, she's giving up and wants to die?! I'm waiting to see if this is a ploy to create sympathy for the character. The positive here is that I'm intrigued…

I'm really hoping that with all of the recent cast changes being announced, and the big move coming up, it will bring an upswing for All My Children. It needs it. The current storylines have a pretty recycled feel, and there is a certain lack of depth. Perhaps they're just coasting until they can get moved and re-established in Los Angeles, and the show will wind up being better than ever!

What is your opinion of the past week's storylines? Be sure to share your opinion with Soaps.com in the comment section below!

Breaking News! All My Children Casts...

Breaking News! All My Children...