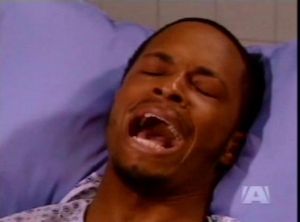 For those Soaps.com readers who don’t know yet, I’m the new writer for All My Children as of this week. I’ve enjoyed getting reacquainted with the show, which I began watching as a child at my grandmother’s house on sick days home from school, although I’ve only tuned in sporadically over the past two years. Needless to say, I have some catching up to do – hope you regular viewers will help with that! Accordingly, my thoughts this week will be brief – the first, tentative impressions I’ve formed since Monday! Here goes:

Stuart’s Murder: Why Stuart?! I was so disappointed to learn that I had tuned in just in time to learn of Stuart’s demise. He was such a wonderful character, so refreshingly different for daytime, and such a contrast to his manipulative brother, Adam. I remember enjoying Stuart’s love stories – with Cindy, and then Marian. He will be missed. As for the mystery surrounding his death – so far it’s shaping up to be an interesting whodunit, that is moving at a good pace!

Angie/Jesse/Frankie/Randi: I was a fan of Angie and Jesse in their youth, and they are still a great addition to the cast to this day! The first glimpse I had of Frankie and Randi was today – unfortunately, it wasn’t a great day to meet Frankie, as he was full of self-pity and really on my nerves by the end of the episode. Hope he comes around with the help of his wife and Brot!

David Hayward: Just starting to put together what he’s been up to since he returned to Pine Valley. As always, Vincent Irizarry is giving stellar performances as the dark doc! His drunk scenes this week rocked – I actually thought he was going to belt Krystal at one point – he scared me!

Jake/Amanda: So, I gather they have hatched a plot where she will give up her baby for adoption, while telling David that the baby perished. Jake has a side deal with Liza, which he is keeping a secret from Amanda. Too many things can go wrong here – it will be interesting to see how it all shakes out.

Kendall/Ryan/Zach: Same old chemistry that I remember between these characters. Is everyone rooting for Zach these days, or Ryan? Let me know!

Annie: I remember when this character was first introduced to the show. The consensus was largely that she was TPTB's replacement for the then-absent character of Greenlee. Has Annie evolved into a worthwhile character? Again, this is something I would be interested in hearing about from readers.

Liza: Of course, I remember Liza as played by Marcy Walker, but I find I'm enjoying Jamie Luner's interpretation of the role just fine. Marcy played the role differently, that's for certain, but Jamie is a strong actress who will have no trouble making her version of Liza a viable part of the canvas given time. Liza was always a bit of a naughty girl (remember her youthful escapades with Tad?), and Jamie Luner does naughty very well. I've noticed just in this week that she has good chemistry with several of the men, and her clashes with Erica have been electric!

Krystal/Tad: My first impression of Tad this week has been that he's behaving a little bit 'off' - a bit goofy? I'm assuming it's his brush with death that is responsible. I'm all for comic relief and positivity, but acting like a buffoon is another story. As for Krystal and Tad, I like them together - it will be interesting to see where this goes.

Marissa: Babe had a twin sister? One who looks completely different from her? Oh boy.

Jack/Erica/Adam: All seem to be exactly the same as the last time I saw them; wearing the same clothes, and saying the same things - I suppose this is good in some ways, not so good in other respects. Hmmm…

What are your thoughts? Jump right in and share them with me. If you agree or disagree with my observations, tell me why! Thanks! Have fun!

All My Children Alums Kelly Ripa and...

All My Children's Jacob Young...