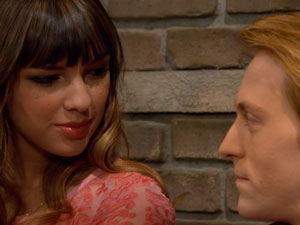 Heartfelt emotions ran high in Pine Valley this week, which is exactly where “AMC” excels. These characters have range and just like the rest of us they aren’t all good or all bad, but fall somewhere in between. Because of that, they are all redeemable no matter how flawed, and more interesting to watch than if they were just one note.

Using the last name.
Dr. Anders acts like such a jerk, so we couldn’t help but smile when Colby browbeat him into moving Cassandra’s procedure along. Colby is a prime example of how entertaining a layered character can be. Her interactions with Cassandra opened the floodgate of emotions, and her apology to JR for never visiting him in his coma was really touching. Of course, when she told Celia she needed to see Pete roll over and beg and tampered with her dress alterations, she was even more fun to watch.

Evelyn had some solid advice for Celia to watch her back, but somehow, even with Colby’s sabotage, it’s pretty much a given that Celia will still end up looking like a vision at the gala.

Trouble in proverbial paradise.
Billy Clyde’s convo with Pete was pretty entertaining considering his obsession with all things Cortlandt. Maybe Pete needs some more buddies, but he was opening up a little too much with someone he never met.

Teenage dream.
Miranda and AJ continued to sniff around each other like lovesick puppies, and shockingly it wasn’t annoying at all. Kudos to the actors for getting these kids engrained in our hearts so quickly. The teen years may be long gone for some of us, but Miranda and AJ bring us right back to those overwhelming emotions that made our first forays into love so memorable. There is something so earnest and heartfelt with these two there is no doubt this is a supercouple in the making.

My uncle, the fashionista.
It’s great that Zach is looking out for Miranda, who really needs someone other than AJ to lean on. Lea was charming with her after their shopping excursion, and with Bianca gone she could be a nice female figure to have in Miranda’s life. And when is Bianca coming back anyway? Teenage girls need adult supervision.

David.
After his back-and-forth with Cara about her abortion it's pretty clear David will be on a rampage about his son soon. Can't wait! That's not exactly a secret that can keep with little Oliver ensconced at Chandler mansion. And while David kind of had a point about Jesse getting a pass for his misdeeds while he did time in jail, their argument did devolve into the playground at recess as they each tried to one up the other on the horrible things the other had done to Angie in the past. Yikes - why is she friends with David and still married to Jesse? Also, this was the second time it has been alluded to that David is the one who shot his own daughter, not JR, so odds are this will turn into something major soon.

The Hubbards.
Angie always has that stand-by-your-man attitude with Jesse, despite him always lying to her. She gets her frustrations out for sure, but knows it is his devotion to his family that motivates him to protect them any way possible, even if it means leaving her in the dark. At least she works through things with Jesse. Not every marriage ends in divorce, and the ones that remain intact take real effort. Jesse and Angie are a great example of the benefits of working through the hard times with your life partner.

Dixie can surely help Cassandra get past this, and her imminent release for rehab at home will hopefully speed recovery along.

The trouble with Jane.
Jane’s Addiction is a great gathering place, and really one of the only ones in Pine Valley right now, but owner Jane always seems a bit out of place and forced into scenes. She’s a good listener and quick with a top off, but what else can she do? Vote below about what you would like to see happen for Jane.

Read Soaps.com’s all new Weekly Soap Opera Tweets for all kinds of backstage insight and personal pictures from your favorite Daytime stars.