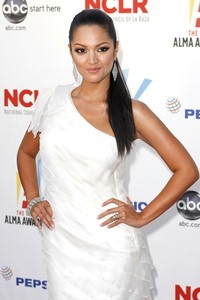 There’s more exciting baby news, a number of fundraisers, a call for questions for an actress, news of a Primetime audition, and the return to TV.

Ambyr Childers with child.
Hot on the heels of the news that Ambyr Childers (ex-Colby Chandler) is in August’s issue of Esquire is the news that she’s expecting her second child with her husband, producer Randall Emmett. Childers is currently starring in Showtime’s “Ray Donovan” on Sunday nights at 10:00 PM. For an online sneak peek visit Esquire’s Ambyr Childers, The Blond And Beautiful.

Eden Riegel’s baby number two.
It’s a boy, so says Eden Riegel (Bianca) of the couple’s second son. We are very excited for her.

Yaya Dacosta Alafia completes filming And So It Goes.
Word on Twitter is that Yaya Dacosta Alafia is done playing pregnant. Her tweet cleared up the mysterious pictures of her with a baby bump seen previously on the web. No specifics on the release date of Rob Reiner’s new film “And So It Goes” but Alafia’s latest film, “Big Words” opens this Friday. The movie is about an unsuccessful hip-hop group and features hip-hop legend Jean Grae.

Paula Garces Comic Con signing schedule.
“AMC” fans and comic book fans alike can visit Paula Garces this weekend at the San Diego Comic Con. Her signing schedule has been announced. Signatures are not ticketed and Garces has tweeted she has free avatars! If you can’t get enough of soap character Lea Marquez (“AMC” on OWN), or the late Flora (“Devious Maids” on Lifetime), follow Garces’ live tweets during both shows.

Susan Lucci hosts Bay Street Theatre’s fundraising event.
The annual Rock The Dock Summer Bash will be hosted by Susan Lucci (ex- Erica Kane). The event supports the Bay Street Theatre programs and educational outreach initiatives. Tickets for the gala to be held on July 20 are available at www.baystreet.org. Can’t get enough of Lucci? Paula Garces is not the only one tweeting during “Devious Maids” on Lifetime. Catch Susan Lucci on Sunday evenings at 10:00 PM sharing in show discussions with fans and co-stars. You might be privy to something devious in her next tweet.

Aiden Turner auditions for Motive.
Good news for Aiden Turner (ex-Aidan Devane) fans. He shared that he just auditioned for the TV show “Motive” on Twitter. Soaps.com will report back as soon as we have word on this development. We’re crossing our fingers for the actor!

Happy Monday ! Does anyone one watch the great detective show 'Motive'? I auditioned for it today in LA and hope to join the cast.

Walt Willey and Bobbie Eakes Pet Project Benefit.
Both Walt Willey (ex-Jackson Montgomery) and Bobbie Eakes (ex-Krystal Carey) will join Howard Johnson (“Monty Python”) for a cast party at JJ’s Pub in Ottawa IL on July 21 to support the 20th anniversary of the Pet Project. The event will start at 5:00 PM following the matinee performance of “Deathtrap.” Information on purchasing tickets for the play and party can be found at the Ottawa Visitors Center. Come out to support the oldest no-kill shelter in the area and bid on signed “All My Children” memorabilia.

Cameron Mathison co-hosts Kris.
Kris Jenner's new talk show, "Kris," debuted Monday with Cameron Mathison (ex-Ryan Lavery) by her side as the show's first co-host. The show premiered on select Fox stations and will feature a different co-host each week in the six-week trial run.

WOW! I'm so thrilled with this segment about my short film, "Flip Fantasia" the movie on MORE! Check it out!... http://t.co/hZUq9UwMZZ

.@debbimorgan is going to be on MORE soon! Want to ask her about her current storyline OR life outside of #PineValley? Send us ur Q's! #AMC

OWN's Summer Fling.
This Monday saw the start of OWN's Summer Fling which airs "All My Children" episodes throughout the week. Did you make the switch to TV? Take our poll and share how you're viewing your favorite soap.

If you are as excited as Daniel Covin (Hunter) about watching the show on TV, answer his call for photo tweets of "AMC" playing on your television.

Tweet me a photo of your TV with #AllMyChildren on it!!!

If you're not sure when to view, Lindsay Hartley (Cara) shared OWN's TV schedule for fans this week.

This week in AMC history.
About this time in 1983, Phoebe tried to regain her sanity after a brawl with Opal while Opal made her case in the streets trying to drum up a crowd to watch the election returns at her house. Meanwhile, Erica's step-brother Mark was dealing with a drug issue at a party and Tad attempted to get Liza to work on a paper with him.

Visit us every Tuesday for the One Life To Live Soap Digest for more actor updates.

Who Wrote ‘Citizen Kane’? It’s a Mystery Even If You Know the Answer (Column)