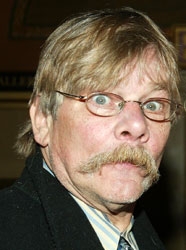 We get a lot of questions about favorite stars-of-the-past here at Soaps.com. One of the actors many All My Children fans ask about is Matthew Cowles (ex-Billy Clyde Tuggle).

2008 and 2009 have been great years (so far!) for Matthew! He has been guest starring in the ABC Primetime hit “Life on Mars” as Cowboy Dan; he also made a special appearance on “Law & Order: Special Victims Unit”. Later this year Matthew will appear in the film “Veronika Decides to Die” with ex-AMCer Sarah Michell Gellar (ex-Kendall Hart)!

However, his next role could be even bigger! Matthew is slated to star in the Broadway production of “THIRST: A Spell for Christabel”!

The play is based on the gothic poem “Christabel” by Samuel Taylor Coleridge. Monika Bustamente wrote the play version, which will run at HERE Arts Center in New York. The First Light Theatre Group is presenting the production.

The play opens on March 17 and runs through April 12. For tickets and showtime information click here.

Congratulations, Matthew! Soaps.com wishes you the best of luck!