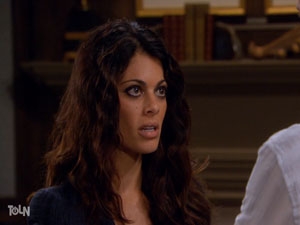 Things were really starting to feel normal in Pine Valley this week, thanks to Jesse’s unwavering inability to tell Angie the truth – much to David’s delight – while JR continued to make dangerous decisions. Just your typical week in town.

Tempo temptations.
Very interesting goings on behind the scenes at Talk Tempo. Dimitri telling Brooke that she is one of the most powerful, talented women he has ever met must have been music to the ears of one of Erika Kane’s oldest rivals. Something tells us Adam won’t be as pleased to hear it as she was, wherever he is. Workwise, it was good to see Brooke second-guess the questions she didn’t push during her interview with David. She should be questioning herself. While the ratings may have been gold, she was pretty soft on him. Not that Dimitri seemed to mind. If Colby catches wind of even a hint of impropriety she will devour Brooke. What do you think about this potential pairing? Vote below.

Celia also obviously has skills at work and it will be interesting to watch this ingénue evolve her career over the years. Too bad she has the meanest mean girl to overcome right off the bat in Colby, who is just delicious. How else is there to describe her? Every manipulative move she makes is purely for stirring the pot, and staid Celia was more fun to watch keeping up with her. We’re looking forward to these two doing battle behind the scenes at Tempo and over Pete’s affections.

Zach’s women.
If Lea is such a good investigator and obviously not above going into Jesse’s computer to dig around, why didn’t she already have that bogus email sent and analyzed? At least she was able to deduce that Zach wasn’t over Kendall despite his insistence he was. Dude, take off the ring! Meanwhile, Kendall is obviously not over Zach either. Something must be seriously wrong for Bianca to be holding a bedside vigil. Maybe a heart transplant? Bianca does need to hurry back so she and Zach can tell Miranda the truth about her parentage like they planned, before someone else does.

Chandler mansion.
Once again Adam’s manse is a hotbed of intrigue, just the way we like it. We’ve got JR and his drugs, AJ’s jealousy, Colby’s machinations and lots of sexual tension. Oh, and let's bring in the son of the most hated man in town and pass him off as the new cook’s grandchild. JR needs something stronger than steroids if he thinks this is going to work. All Oliver has to do is avoid calling Cara "mom." Right. Not only is that kind of damaging, how exactly do you untrain a 5-year-old boy from calling his mom by the only name he has ever known? Not to mention people have actually met Cara’s mother. Doesn’t sound like the best plan, but here’s hoping Winifred retires somewhere warm rather than stick around this place.

Cassandra’s choice.
"AMC" has never shied away from tough storylines, and while human sex trafficking is a new one for them, unwanted pregnancy and abortion are not. Erika put "AMC" on the map with her abortion storyline back in 1973. Exactly 40 years later it is just as contentious no matter what Cassandra decides.

Read Soaps.com’s All My Children Recaps: Part 1 and 2 for more details about what went down in Pine Valley this week, including AJ's date with Heather, as well as some insight into what will happen next week.