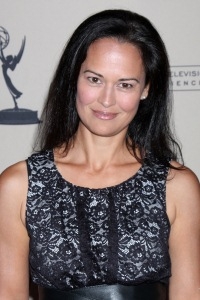 There are a few more great TV movies coming up, a play reading date for one actor, funny theatre for another, a chance for fans to win tickets to a show, and production updates on a movie and a web series. Don’t blink for fear of missing something.

Sydney Penny in Perfect Summer.
This weekend, “Perfect Summer,” staring Sydney Penny (ex-Julia Santos) premieres on the UP cable network (formerly GMC). Penny plays a single mom who moves to a small beach town with her shy son to be near her estranged father. The “Perfect Summer” sounds like a perfect summer movie reminiscent of a good book you’d take to the beach. The movie airs July 13 and 14 at 7:00 PM, 9:00 PM and 11:00 PM.

Tonya Pinkins in Patti Issues.
Not too many weeks go by that we don’t have news to report on Tonya Pinkins (ex-Livia Frye Cudahy). Check out a mock-PSA promoting her latest part in Ben Rimalower’s Patti Issues. Get your tickets today for this extended production which runs on select dates at various locations through September 7. It’s sure to be a hoot!

Walt Willey promotes Deathtrap.
Walt Willey (ex-Jackson Montgomery) recently finished spending time with Bobbie Eakes (ex-Krystal Carey Chandler) at the Miss Virginia pageant and is now off to promote his annual summer theatre presentation, “Deathtrap,” with an autograph session at the 3 French Hens French Country Market in Morris Illinois on Saturday July 13. For more information and an opportunity to win two tickets to the show on Saturday July 20 in Ottawa, visit the 3 French Hens Facebook page. Bobbie Eakes and Willey’s 18 year old son Chance will guest star in this comedy thriller billed as a play within a play where a playwright considers killing a student for to obtain his successful sounding play.

Eric Nelsen in The Drama Department.
Midtown Direct Rep added Eric Nelsen (AJ) to the reading of "The Drama Department" by James Hindman. Hindman's play is the Terrance McNally Award finalist play about a drama teacher embroiled in the middle of a controversy when the school board president's son isn't cast in the lead part for the school musical. Nelsen, Jason Little ("Hair"), and Sainty Reid ("Finding Nemo") are scheduled to join the previously announced cast, Christiane Noll ("Ragtime"), Danielle Ferland ("Into The Woods") and Adam Dannheisser ("Rock of Ages") on Sunday July 14 for the reading. For tickets visit Midtown Direct Rep. Nelsen would love to see you there.

Christina Bennett Lind in Fireworkers.
The talented Christina Bennett Lind (ex-Bianca Montgomery) is working on a movie as screenplay writer, director, producer and star. "Fireworkers" is a touching film about old friends coming together to complete a late-friends final to-do list. We'll keep you up-to-date on the latest developments for this drama scheduled to be released in 2014. Meanwhile, we can send Lind congratulations on her engagement. According to her Twitter account she is sporting a new accessory on her left hand and is looking for wedding websites to plan her big event.

Alicia Minshew returns to AMC.
This week fan favorite Alicia Minshew returned to her role as Kendall Hart Slater. She didn't come back to Pine Valley, but someone from Pine Valley came back to her. Have you missed her? Would you love to see Kendall return permanently? Take our poll and weigh in today! Visit our AMC Recap: Lurking For Any Opportunity for a preview of Kendall's return and visit every Monday for the week's two recaps.

AMC history.
It is all water under the bridge for Bianca. Her and her sister Kendall have come a long way considering the problems of their youth following Kendall being reunited with her mother Erica Kane. It was sometime after Kendall's appearance in 1993 that she started acting out. She was on a streak and went out of her way to seduce her stepfather, Dimitri, after locking Bianca in a crypt. Little step-sister survived and Dimitri turned her down.

Every Tuesday visit the One Life To Live Soap Digest for more actor updates.