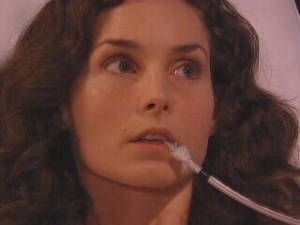 Did I miss four months of 2009? Is it May already? Am I late in sending out a bunch of calla lilies to my mom? I’m not? Whew! But what’s with all the Mamma Drama in Pine Valley? They need to warn us about mother-dominated storylines; I nearly called my own mom – four months early! We can’t have that (kidding, Mom, really, just kidding!).

All the Mom’s At the Shower

The Bianca/Reese/Greenlee wedding shower was a hoot. Seriously, Erica throwing snowballs? Mary waltzing in like it’s the most natural thing in the world to attend a child’s bridal shower? Claire bringing up Reese’s engagement to a (gasp) man! Could it have been any more campier? Only if Erica, Mary and Claire had joined together to throw snowballs at all three brides…but that might have been just a leetle bit over the top!

Seriously, I did like the shower. It was nice to see the girls getting so excited over their upcoming nuptials. Kind of sad that their only friends were Opal, Amanda and Randi (come on, Powers That Be, hire a few random dayplayers to flesh out the party) and no one ate cake but fun all the same.

Okay, all hands on deck, Dr. Sinclair has an agenda! Did anyone else find it curious that she seems to know everything about Pine Valley’s residents? Seriously, how much money did she invest in private detectives before landing at Oakhaven and proceeding to make Annie into a hardened criminal? I’m not saying Annie doesn’t deserve prison; she did do lots of bad things. But killing Richie wasn’t one of them. The man stole bone marrow, attempted to murder Zach and Greenlee, kidnapped Babe, pushed his own mother out a window (as far as we know) and caused his father to lose his hearing. Not exactly a saint is our Richie, but obviously Dr. Sinclair doesn’t think that matters. All that matters to her is that Annie killed a murdering, kidnapping man. You know what I think? I think Dr. Sinclair’s talk about therapy being like love means only one thing: at some point she hooked up with Richie, he conned her and she’s seeking revenge. That is the only thing that makes sense to me.

While we're on the subject, could the good people of Pine Valley stop acting like imbeciles. Jesse totally gave away Tad's ruse with Sinclair at ConFusion. Hello, Jesse! Tad's a private eye so you shouldn't bat an eye when he gives a false name. Yeesh! By the way, siding with David over Angie…not the smartest move you've made thus far.

I want to feel bad for Amanda. Really and truly I do. But so far she's just too whiney for me to care. Yeah, she's pregnant. No, she had no mother figure growing up. With David as a baby-daddy possibility I'd be running for the hills, too. But stop whining already, stop looking longingly at baby clothes and do something about it. You're a strong girl, Amanda. You conned Adam Chandler out of $5 million. You and Babe launched Bella on your own and it was a hit (until Adam got involved, but that's another story). Tap into some of that Uncle Porkchop juju you've got working for you and work this pregnancy. It isn't the end of the world. Single women raise babies all the time. That mil you got out of David will go a long way toward buying diapers.

Okay, Kendall's awake. Yes, I've missed the character. No, I don't think this is the right 'waking up' moment. That would have been two weeks ago when Erica started her 'I love Reese, let's kill her' diatribe. Seriously, buttinsky Kendall has been missed in Pine Valley; she would never stand for the stuff Erica's been pulling. Mary showing up at the shower? Kendall would've iced her at the door. Claire bringing up Reese's past? Kendall would've had some dirt on Claire and swept it right into the middle of the room. Erica blowing everything out of proportion? Kendall would've had her own snowball melting in Erica's hair weeks ago!

So I'm glad Kendall's back but if we spend the next two weeks getting her out of the hospital, I'm going to be throwing my own snowballs at the writers. Move it along!

So Brot has a career now. Any guesses how long it will take him to earn his medical license and oust David from Chief of Staff?

Greenlee knows how to turn on an oven. Maybe she's the next Martha Stewart?

Angie's a criminal. Hey, it had to happen sooner or later, right?

The best lines of the week:

David to Jake, "From Doctor's Without Borders to Doctor With No Career!"
"You better watch it or you'll be the only doctor at the hospital," Jake replies.

David to Krystal, "I've opened an escape hatch for you. All you have to do is walk through it!"