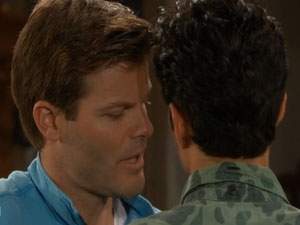 Secrets are bubbling just under the surface, ready to bust forth at any moment. And while Pete hopes Colby continues to keep their romp under wraps from Celia – good luck with that – that is only one of many major potential explosions set up this week in Pine Valley. From Zach and Lea’s snooping on Jesse’s computer to Cara keeping David’s son hidden in Puerto Rico we can’t wait for the aftermath when some of these storylines are revealed.

Cassandra’s pregnancy.
Yet another roadblock in this poor girl’s road to recovery. Her mother-daughter scenes with Angie are so emotional these two must be drained after shooting. But, it’s a good counterbalance to Anders’ cold and sterile ways. Of course that rough exterior is sure to be hiding a heartbreaking past deep down that Dixie will be sure to touch. And is there something special brewing under the surface between David and Angie? Their bond is as close as ever as Jesse continues to keep her out in the cold, again.

Rising tension.
Between Miranda and AJ and Cara and JR, the Chandler men have some serious sex appeal to the ladies around them. Dixie’s face when she caught JR and Cara rolling around on the couch during their yoga session was pretty priceless even though looking shocked is something we’ve come to expect from her on a regular basis. Meanwhile, Zach and Lea continue to get close and very comfortable in their pajamas. Sparks may be flying but it would be nice to learn more about what makes Lea tick.

Shady dealings.
Buying drugs from a teenager is pretty low, even for JR. We thought for sure he would have hooked up with Colby’s dealer instead of AJ’s teammate. Either way he needs to stop leaving his backpack lying around the mansion. Between Colby’s prying eyes and Cara’s curiosity he could get nailed, and soon. Heck, Dixie is probably still doing his laundry and could stumble upon the steroids herself. And Lord help him if Colby finds out. Something tells us blackmail is not out of the question with the new and more Liza-like Colby.

Meanwhile, Jesse continues to tangle with Uri. If Zach and Lea are right and he killed his own brother, he is as cold as it gets and Jesse needs to bring him down. But working alone won’t get the job done and he needs to come clean with his partners, especially now that they are digging around on his computer without him.

Cara’s secret.
Cara finally got some forgiveness from David for having an abortion which means he's sure to find out that she is really stashing their son out of the country. And while he might eventually get past that, he will never get over the fact that JR knew about it before he did and was funding little mother-son trips to amusement parks. Pine Valley is about to get a dose of David at his most destructive.

Talk Tempo.
There’s high hopes that Brooke and Dimitri’s new media venture will be the source of much drama, but not this week. David’s big interview should have been much more explosive than it was. I would have thought they would have delved much more into Project Orpheus. I mean, wasn’t there another body yet to be revealed? Possibly they are just trying to pretend this storyline never existed for now. More details about his new medical breakthrough also would have been nice. And did David shoot his own daughter? We seemed to delve into shady territory here. As it was, David directed the interview, not Brooke.

Read Soaps.com’s All My Children Recaps: Part 1 and 2 for all the details about what went down in Pine Valley this week, and some insight into what will happen next week.