All My Children’s Laura Koffman Chats with Soaps.com! 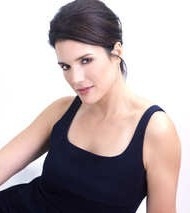 She joined our favorite residents of Pine Valley just a few months ago, but Laura Koffman (Rebecca) has already won many fans over! Despite the fact that Rebecca is Jesse’s ‘other woman’, fans can’t seem to get enough of Rebecca, even the die-hard Jangie (Jesse/Angie) fans!

When Laura took on the role, it was for a short time, but she hinted that the four month run (which is ending very soon now) could be extended? Will it extend? Find out what Laura has to say in this Soaps.com Q&A with the star!

Soaps.com: “It’s been several months since we last talked, how have you liked your time at AMC?”

Laura Koffman: “I loved it! They are a great bunch of people and working with Darnell (Williams, Jesse) and Debbie (Morgan, Angie) was wonderful! Shannon, who plays Natalia (Rebecca’s daughter with Jesse), is delightful! Cornelius, who plays Frankie, is such a nice man; he is such a lovely young man!”

Soaps.com: “From Rebecca’s first appearance in Pine Valley she has seemed so sincere when it comes to Jesse and Angie … after playing her for a few months, do you feel that is the real character or is she hiding her own pain behind a mask of kindness?”

Laura Koffman: "I think she's hiding her own pain, but that doesn't negate the fact that she is sincere. People have the capacity to hold more than one point of view and I feel very strongly about that."

Soaps.com: "Tell us how Rebecca has been different from other characters you've played…"

Laura Koffman: "I got to create her from the beginning and, facing the end for her, she had things in perspective. I like the idea of holding life up to that barometer, if you will. And I got to be the other woman; it is fun to be the other woman! And I could also be compassionate in a way that other characters aren't able to be!"

Soaps.com: "What is next for the character?"

Laura Koffman: "I'm not allowed to say a word"

Soaps.com: "Just a hint…The original run for Rebecca was only for four months; will she remain in Pine Valley? Or is Rebecca headed out?"

Laura Koffman: "I can't even tell you that!"

Soaps.com: "What non-All My Children gigs are on your plate right now?"

Laura Koffman: "I've started modeling again, so I'm working on some modeling work. And I'm thinking about a trip to L.A. and looking into some theatre in New York. Daytime is so busy so it's hard to do other things but I did an off-Broadway run and that was great. I loved being back on stage!"

Soaps.com will have more from our chat with Laura coming up in a few days – including how she spent Inauguration Day and her plans too keep 'greening' up the earth! Stay tuned!!