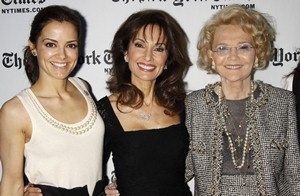 There are questions answered regarding the current halt in production, a few stars hosting events and some more TV and movie news.

AMC tops TV Guide’s Social Power Ranking.
Fans not only watch “AMC” online, they talk about their “AMC” online. The show is the most discussed show and fan favorite over “Burn Notice,” “American Idol,” “Game of Thrones,” and “Revolution.”

Hoping for a swift resolution to issues with IATSE. Tomorrow we will be editing some new@allmychildren episodes I hope u will enjoy. #AMC

Celebrity Autobiography: The Next Chapter.
Susan Lucci’s autobiography, All My Life: A Memoir is one of the featured books for this weekend’s upcoming hilarious Celebrity Autobiography readings at Stage 72 in New York. It’s not known which celebrity will perform the reading but the upcoming June 15 and 17 dates include Jane Krakowski (“30 Rock”), Tony Danza (“Taxi”), Brooke Shields (“Suddenly Susan”) and Mario Cantone (“Men In Trees”) to just name a few. Visit CelebrityAutobiography.com for more information.

Charges dismissed against Michael Nouri.
Alleged domestic abuse charges against actor Michael Nouri (ex-Caleb Cortlandt) were dropped. Nouri recently starred on "NCIS" as Mossad Director Eli David and was a guest star in March on "Body of Proof." He is scheduled to teach an acting workshop at the New York Film Institute this summer.

Susan Lucci to host Rock The Dock Summer Benefit Bash.
Susan Lucci (ex-Erica Kane) will host a summer benefit bash for the Bay Street Theatre in Sag Harbor, NY on July 20. Richard Kind ("Spin City") will be serving as the celebrity auctioneer for the event. Prior to that Susan Lucci is scheduled to visit the Katie Couric show on July 2. Sign up for tickets to Katie Couric today.

Paula Garces is a fan of Devious Maids.
Speaking of Susan Lucci, the pilot to her new show "Devious Maids" is available online before its premier in both English and Spanish. Paula Garces (Lea Marquez) has already been tweeting about the gorgeous cast.

mylifetime.com/shows/devious-… I'm watching pilot ep now for the 1st time watch it w me let me know what you think answering questions after xo

Denyse Tontz covers Bluebird.
Here's another taste of music from Denyse Tontz (Miranda Montgomery) sharing her rendition of "Bluebird" with fans on YouTube.

AMC history.
Colby returned to Pine Valley right behind her childhood friend Peter Cortlandt and recently found out he had a girlfriend. All of a sudden a budding interested seemed to appear for him. Too bad Colby never had the time or interest to share the same feelings of love Peter had for her in the past.

Remember to join us every Tuesday for a new "All My Children" Soap Digest and visit Soaps.com's All My Children Message Board to discuss your favorite storylines and dish on the latest news.

Don't miss the happenings in Llanview. Join us every Tuesday for a new One Life To Live Soap Digest.