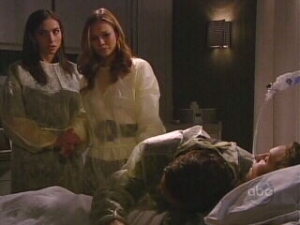 Who's the daddy? (Soaps.com)

You know my mother always told me that it was a woman’s right to change her mind (no laughing from the Peanut Gallery!). This week, I’m changing my mind (can you guess what about?) – at least once!

First, could someone buy Krystal a clue? Has she completely lost control of her faculties? Seriously, the Krystal we knew when she came to Pine Valley would never have been taken in by David’s lies. Not in a million years, no matter what happened. I understand Babe died. I understand she’s now hooked on David’s drugs. That doesn’t negate the facts that she should have memorized by heart: David is a user, David is a criminal and David is a liar. Krystal. Clue. Let’s have a meeting!

Second, Michael E. Knight (Tad) is da man! I lurrve him. Tad was spot on when he grabbed Krystal this week and told her to wake up (note to Tad: next time throw some water in her face, too). I want more of this Tad – the Tad we all know and love! – forever and ever, amen. No more smiley ‘I’m Just A Dad’ Tad; give me Fightin’-Mad-Tad and keep him coming! And maybe introduce him to Rebecca! Last week I polled you to see who you would like to see Tad paired with – and most of you said Rebecca. Hmmm…great minds think alike!

I really enjoyed the Erica’s Choice storyline that had her deciding between her children. Did she decide a little too quickly? Yes, but that’s a soap opera for you. What I didn’t like was Bianca whining about how much she loved Josh, how sweet and funny he was and what a great guy. Hello! If you thought that, you would have told Reese about him – and she wouldn’t have thought he was a random architect groupie at the casino! Yeesh!

Yep, you guessed it, I’m changing my mind about David. Why? Because I’m tired. Seriously. For weeks I’ve been going on and on about the value of a great villain and I haven’t changed that opinion. What I am changing is that David is a great villain. I think he’s more than that.

I love the character of David, there is so much potential there, but the writers seem to see David as one-dimensional. When he came on the scene he wanted to destroy the Martin clan; this time around he wants to destroy the Martin's, the Chandler's, Amanda, the Hubbard's. Basically anyone and everyone in Pine Valley; so far the only family escaping his madness is the Kane crew.

Why is this? Why this hatred? That is what I don't get, and for me a villain has to have a reason. Am I forgetting something? Did anyone in Pine Valley harm him in another lifetime? Because I really don't get his all-consuming hatred. Why not redeem David and make him into an understandable villain – the kind we all love?!? Villains like Adam Chandler are understandable; we can root for them. They do despicable things but for a reason – to protect their family, to get their company back, etc. David has no reasons for destroying the people in Pine Valley, at least not that I can see, so why not redeem him and then give him reasons? Give David – and us! – a look farther into his past so that we can understand his hatred. Is that too much to ask?

Finally, we get a little more of the Brot/Taylor twists and turns, which really have me entranced. JR Martinez (Brot) has won me over; from the moment he hit the screens I was a fan but this week when Brot withstood the horrible name-calling of Colby's friends I could see real pain in his eyes. And, yeah, I got a little weepy. So sue me!

Somebody buy a friend for Amanda. Between Jake, David and JR it's no wonder she thinks her only option is abortion. The poor girl needs a girlfriend, someone to talk to who will listen and not judge. Not one of the men in her life will do that. And don't get me started on the possibility of another child for JR to hurt or David to destroy. Of all the choices, I think Jake makes the best baby-daddy, but he's wounded, too, and not at all the man Amanda needs in her life. You know what I'd like to see? Amanda step up to the plate, toss out all of her men and be a single mom. Now that is a story a lot of us would like to see on All My Children!

It was nice for Ryan to mention the real love of his life Gillian this week. Now, could someone smack him over the head before he marries Greenlee? Maybe then he'll really get his memory back and be the Ryan we all know and love!

Also, does the talk between Erica and Jack mean we'll finally get a real Jerica reunion? Please, please pleeeeeeeze?

My favorite lines from this week?

Ryan to Erica, "Even Erica Kane can't go on forever without sleep and a little food."

"Should I get ahold of a priest? Do you need an exorcism?" Tad asks.

All My Children's Laura Koffman...