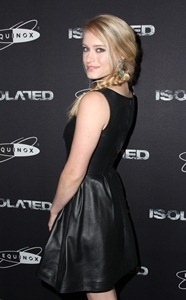 They’re feeling the love in Pine Valley. Cast is sharing their appreciation, free giveaways are available to music and comic book fans, and a number of summer events and entertainment news are available.

Leven Rambin’s summer films.
Leven Rambin (Ex-Lily Montgomery Lavery/Ava Benton) is on a roll in the movie department. This summer Rambin appears in “Percy Jackson: Sea of Monsters,” a young adult adaptation from the fantasy book about the son of Poseidon searching for the mythical Golden Fleece. Rambin soon will be seen in the upcoming indie films “Seven Minutes,” a thriller about an athlete’s wild life after a serious injury, and “Walter,” a story about a movie ticket-taker who believes he’s the son of God who determines everyone fate after coming in contact with them.

Eric Nelsen filming Happy Baby Movie.
Eric Nelsen (AJ Chandler) is busy filming a movie this summer and shares his experience on Twitter. Keep an eye out for “Happy Baby” based on Stephen Elliott’s novel about S&M, drugs, and juvenile detention centers.

Filming a movie in the summer that is set in winter makes for one sweaty day. @happybabymovie

Prospect Park’s labor issues.
The International Alliance of Theatrical and Stage Employees (IATSE) – Local 52 thinks that “AMC” crew members may be underpaid. IATSE will investigate where production has gone over budget and further violated labor agreements which allowed Prospect Park to pay members less than the standard day rate where an episode cost no more than $125,000. Some episodes are estimated to have doubled that figure. This could mean back pay and additional costs paid back to members. In addition, Prospect Park may have violated another contractual agreement where it promised to release episodes on the internet exclusively for nine months after production.

Sonia Blangiardo’s Tainted Dreams.
“AMC’s” Supervising Producer, Sonia Blangiardo, is the creator and executive producer of the new soap “Tainted Dreams.” The soap follows the lives of the soap cast, crew, and corporate network heads of the fictional soap “Painted Dreams.” Talent for the production comes from a number of sources including actors from “All My Children,” “One Life To Live,” and “As The World Turns.” Pine Valley fans can look for Alicia Minshew (Ex-Kendall Hart Slater), Walt Willey (Ex-Jackson Montgomery), and Michael Lowry (Ex-Jake Martin) in the soap production soon.

Walt Willey and Bobbie Eakes co-host 2013 Miss VA Pageant.
Jill Larson (Opal Cortlandt) was hoping to see these two return to Pine Valley, but Walt Willey (Ex-Jackson Montgomery) and Bobbie Eakes (Ex-Krystal Carey) have other plans this summer when they come together to co-host the 2013 Miss VA Pageant in Roanoke, Virginia from June 27 – 29. You can view a live HD webcast of the three night event for a fee.

Paula Garces offers free digital comic book.
For comic book fans out there, Paula Garces (Lea Marquez) is offering a free copy of her first digital issues of her Aluna Comic Books. The offer comes with the announcement that she’s teamed up with the Assassins Creed Writers to collaborate on the Aluna Trilogy. Look for more information in the future on Garces appearance at San Diego’s Comic Con this July. Follow @paulagarces1 on Twitter for more giveaways.

paulagarces.com/wp-content/upl… As a token of my… fb.me/2sH3XanZU Get your free #Aluna comic book now thank you all for your love&support xo

Michael B. Jordan in Fruitvale Station.
Michael B. Jordan (Ex-Reggie) is co-starring in the upcoming moving “Fruitvale Station,” the real life story of a young man on the last day of his life. Jordan soon can be seen with Zac Efron (“Hairspray”) in “Are We Officially Dating,” a comedy about three bachelors. He’s currently in pre-production of the movie “Pretenders” with David Schwimmer (“Friends”) as well.

Tonya Pinkins' Unplugged premiered.
Tonya Pinkins (Ex-Livia Frye) is in the news again with the June 3 premiere of her new cabaret show, "Unplugged." Pinkins is doing "The Life and Times of Ethel Waters" June 8 – 9 at the Barrington Stage Company and will also be part of the Breaking Through Barriers Festival later this June.

Eddie Matos and The Band From TV support T.H.E. Foundation.
Eddie Matos (Ex-Reverend Ricky Torres) is a percussionist for The Band From TV and will be performing at the T.H.E. Event (Together Helping Education for Las Virgenes Schools) June 8 along with a number of musically talented TV stars.

Finn Wittrock in The Guardsman.
Finn Wittrock (Ex-Damon Miller) is playing The Actor in Ferenc Molnar's "The Guardsman," which premiered in late May at The Kennedy Center. Performances will be held in the Eisenhower Theater through June 23.

AMC History.
It's been a decade or so since Dimitri Marick has returned to Pine Valley. He's sure to have some supportive contacts. Dimitri was supportive of Erica when Bianca was outed as a lesbian by a reporter. Although Erica confessed all the men she had since he left and later thought him to be dead could not compare to him, Dimitri was devoted to his wife Alexandra Devane Marick.

Please join us every Tuesday for a new "All My Children" Soap Digest and visit Soaps.com's All My Children Spoilers to see who David is bothering next.

Find out what the actors are doing Tuesdays for a new One Life To Live Soap Digest.

Why Mena Suvari Opened Up About Surviving Sexual Trauma and Substance Abuse: ‘I Got Exhausted Keeping Up Appearances’